The COVID-19 pandemic isn't over

If you listened only to the world’s political and business leaders, you could be forgiven for thinking that the pandemic is all but over. Or, in the most repeated words of the last twelve months, that we’re “learning to live with it”.

Yet in the last 28 days, a further 288,000 people are dead with COVID-19, according to the official global tally collated by Johns Hopkins University of Medicine, one of the world’s foremost research centres.

The Economist magazine is also keeping a running estimate of “excess deaths”, which is a gauge of how many people are dying because of the pandemic in general—including, for example, people with non-COVID-related illnesses who would otherwise have been expected to live if it weren’t for overwhelmed health systems preventing them from getting treatment.

By its estimate, somewhere close to 1 million people died in the last month because of COVID-19. The final week of January was the second highest death surge since the pandemic was declared. 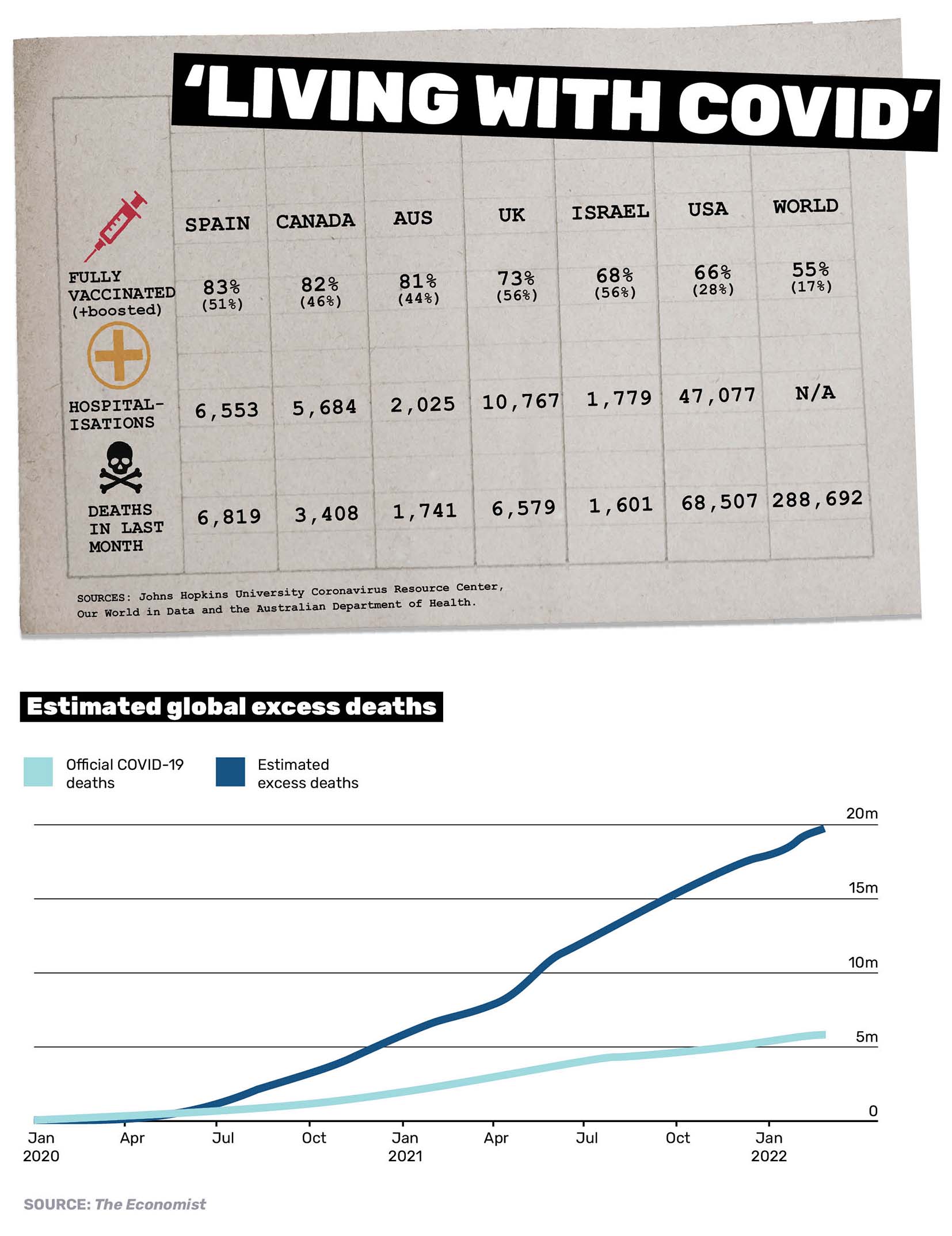 Despite these astonishing and horrific figures, the lion’s share of media attention continues to be about public health measures being just too inconvenient and onerous for business owners to bear. The people who really seem to matter aren’t the ones enduring incredibly painful, suffocating deaths, but tourism operators, airline executives, shopping centre operators and so on.

In Australia, there have been more than 1,700 COVID deaths in the last month. Yet state and federal governments are doing away with even the most basic of public health measures, such as mask-wearing indoors. If terrorists killed just 1 percent of the number that COVID claimed in February, the whole country would be on a war footing. Politicians would be screaming “never again!” and throwing billions into the intelligence agencies and the military. Can you imagine any of them saying, “Well, we just have to live with it”?

But with COVID, we are reminded again and again that the deaths primarily are among the elderly and others with “pre-existing conditions”. So we needn’t worry too much—just get out there and spend, spend, spend. What better indication of the priorities of capitalist society, in which the cries of billionaires to let the virus rip are heeded while the elderly, the disabled and the sick are just so much collateral damage in the pursuit of profits.

Osama bin Laden could never have hatched and executed such a plot to kill so many innocent people for such nefarious ends. Such is the cunning of the billionaire class and its servants in parliament and in the media.

It is true, thankfully, that the Omicron wave is subsiding. But the capitalists and the politicians want us all to forget what’s just happened. We’ve had a series of infection “waves” that, despite mass vaccination programs reaching nearly two-thirds of the world’s population, have gotten worse in many places, the United States being an obvious example.

And there’s been a series of virus mutations—Alpha, Beta, Gamma, Delta and Omicron being the most notable. No-one can say that the next mutation won’t be deadlier and more transmissible. Yet nothing is being done to prepare for the worst. Every move is to tear down public health barriers and enable business to make profits like there’s no tomorrow.

It is truly a sick system.