Whether a country or business has pledged “net zero” by 2050 has become the supposed touchstone for overcoming the climate crisis. US President Joe Biden, UK Prime Minister Boris Johnson, mining magnate Twiggy Forrest and the British royal family are just a few of the new spokespeople for net zero ambitions, which in reality are just the latest global greenwashing fad.

Net zero does not mean zero carbon emissions. It means “offsetting” emissions, so that the amount of carbon dioxide being released and the amount being offset are roughly the same. The caveat is that the offsetting technologies do not work—at least, not anywhere near the level needed to offset the billions of tons of CO2 that are emitted every year.

Carbon capture and storage (CCS) is the offsetting fad of the moment. It is a process of capturing carbon dioxide before it enters the atmosphere, transferring it somewhere to be planted in the ground and then storing it for centuries. However, the current CCS technology is not working. CCS has been able to bury, on average, 39 million tonnes of CO2 a year, according to the Global CCS Institute 2020 report. That is a drop in the ocean when compared to the 36 billion tonnes of CO2 that were emitted in 2019. 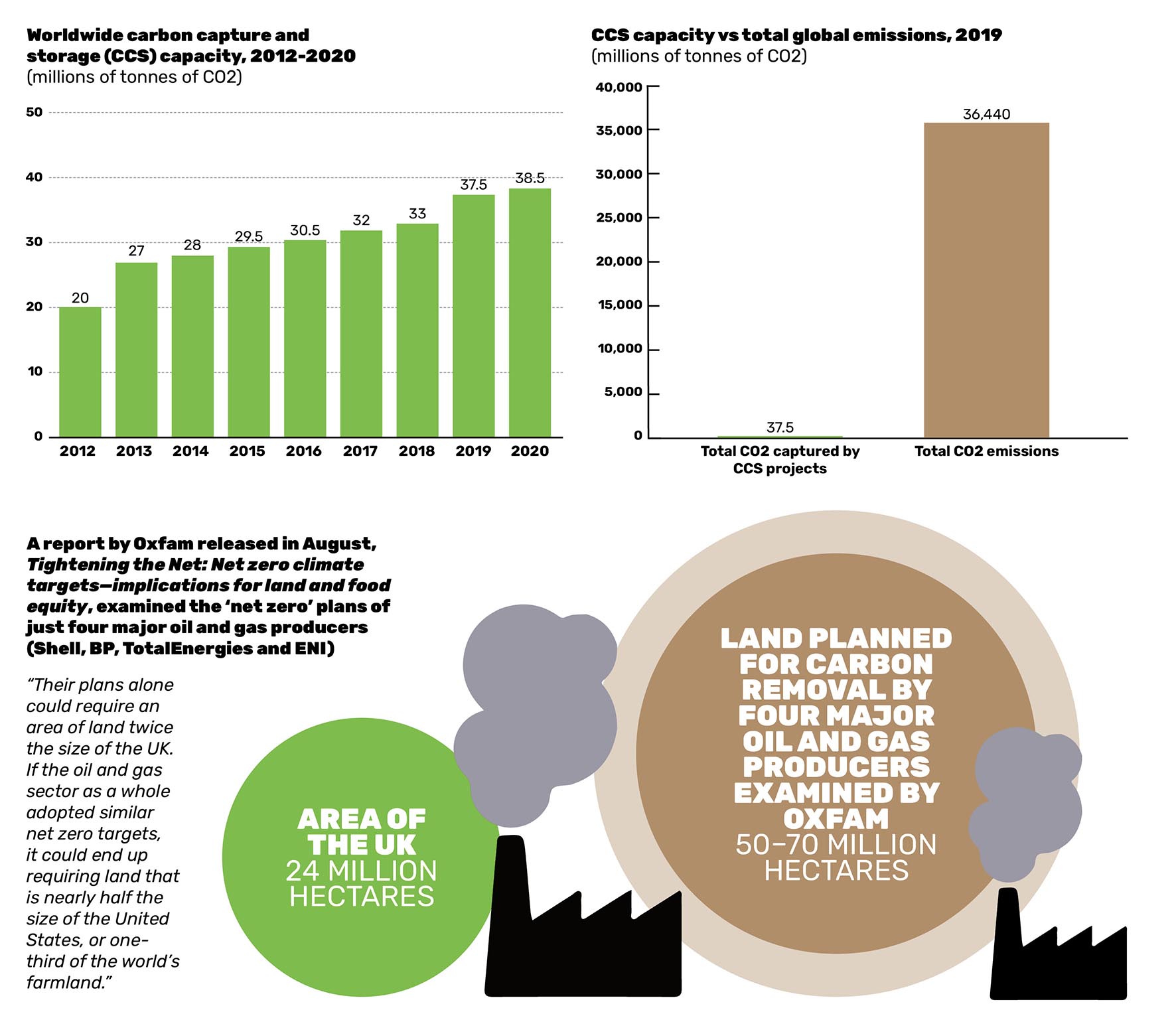 Western Australia is home to Gorgon, one of the largest CCS operations. Chevron built the $74 billion dollar facility in 2009, promising to offset 80 per cent of its emissions. Yet there has not been a single day in Gorgon’s five and a half years of operations when all parts of the CO2 injection system have worked at the same time. According to the Gorgon Project’s 2020 annual report, 15 million tonnes of CO2 have been transported to the facility since it opened, but fewer than 5 million tonnes have been successfully injected underground.

The other big offsetting scheme is tree planting. The logic is that trees remove CO2 from the air, store the carbon in the soil and release oxygen into the atmosphere. Tree planting has been the strategy of airlines for some time. But often they are not planting trees at all. Rather, they pay to protect forests under threat from logging. So they’re not necessarily increasing the amount of CO2 that is being sucked up.

A recent United Nations report, “The State of the World’s Forests 2020”, revealed that 5 million hectares of new trees are planted per year, while 10 million hectares are cut down. So while the number of trees continues to decline, banks and airlines nevertheless can portray themselves as green.

A more serious version of offsetting using trees is bioenergy with carbon capture and storage (BECCS). This involves planting a forest to suck carbon out of the atmosphere, then cutting the forest down and burning it in a power station to produce electricity, then capturing the carbon emissions and injecting them underground. The forest is then replanted, and the process starts over.

According to the Global CCS Institute, there were five operational BECCS facilities that captured a total of 1.5 million tonnes in 2019—again, practically nothing. BECCS is a dystopian solution that, based on Intergovernmental Panel on Climate Change modelling, to be successful would require access to one-quarter to one-half of the world’s arable land by the end of the century.

Unfortunately, this is the trend with all offsetting schemes. They are expensive, often costing billions of dollars, yet do not come close to the level needed to reach net zero by 2050.

Why then is net zero so in vogue? Because it allows countries to “commit” to targets that require no disruption to big business profits. The targets pose no threat to the ultra-wealthy class that is profiting from environmental destruction. They can be agreed to without disrupting production in the coal, gas or oil industries.

Net zero allows politicians and business owners to make a rhetorical commitment to stopping warming at 1.5 degrees, plus announce a host of investments into failing offsetting schemes. And that is about all capitalism is willing to do to solve the climate crisis.

Chants of “Victory to the RMT” echo through Britain’s major cities as 40,000 rail workers continue their resolute campaign for better pay. Their actions have ignited the confidence of a working class facing wide-ranging assaults on living standards. Headline inflation is running at 9.4 percent in the UK, and ordinary workers are being hit hardest. Housing, water and fuel costs have

The fragility of US democracy
Omar Hassan

The investigation into the storming of the US Congress in January last year has proven beyond doubt that Trump was seriously attempting a “soft” coup. Until recently, the media coverage have largely focused on the actions of a motley crew of conspiracists, used-car salesmen and fascists who led the events of 6 January. While undeniably despicable and deserving of serious contestation by the left, these forces are totally marginal to politics in the United States.