Two of the Liberal Party’s most prominent women resigned from politics this year – former foreign minister and deputy leader Julie Bishop and Kelly O’Dwyer, minister for jobs and industrial relations.

The media have gushed about the style with which Bishop swanned about on taxpayer money, attending polo matches with the wealthy as she defended their interests on the international stage.

The departures, we are told, have exacerbated the party’s “woman problem”. Commentators point to the handful of women who have eschewed the Liberals to stand or sit as independents.

Women such as Julia Banks, who resigned from the party after Malcolm Turnbull was rolled as prime minister, Kerryn Phelps, former head of the Australian Medical Association, who won Turnbull’s blue-ribbon seat of Wentworth as an independent, and Zali Steggall, former Olympic skier and lawyer, who is challenging Tony Abbott in the seat of Warringah in the upcoming federal election.

They’re all described as economic conservatives but progressives on social questions. Modern, pro-business women who in the past would have happily joined the Liberals but no longer feel at home in a party increasingly dominated by a right wing, culture war faction led by troglodytes such as Abbott and home affairs minister Peter Dutton.

It is undeniable that the Liberals are full of misogynists. It’s also true that Bishop has encountered sexism during her political career. But the interests of the majority of women are not advanced by more conservative women presiding over a system that enriches the few by slashing the wages, welfare and rights of the many.

Look at Bishop’s record. She made her name as a lawyer for CSR, a mining company that poisoned generations of workers, their families and so many more, with asbestos. CSR knew the material was deadly but continued to mine and sell it because profits were considered more important than working class lives.

While hundreds were dying excruciating deaths from asbestosis or mesothelioma, Bishop argued that CSR’s subsidiary companies bore no responsibility. She delayed court proceedings to make sure sufferers died before they could get compensation.

As foreign minister, Bishop backed Israel as its snipers killed Palestinian protesters on the Gaza border. She built ties with the military junta in Myanmar as it committed genocide against the Rohingya, an ethnic minority. The government she represented forces Rohingyan refugees on Manus Island and Nauru to return to danger. And she backed Saudi Arabia’s murderous war on Yemen, a country experiencing one of the worst humanitarian crises of modern times.

Some of the most sycophantic pieces eulogising Bishop’s career make out that she was some secret feminist because she wore a designer white dress – supposedly a coded nod to the suffragettes – when delivering her farewell speech to parliament. But Bishop made it clear throughout her time in her “beloved Liberal Party” that she was never a feminist. She opposed quotas within the party to increase female representation and never once spoke against arch-conservative Tony Abbott, even when he appointed himself minister for women.

As a prominent Western Australian politician, Bishop never objected to the incarceration of Indigenous women for unpaid parking fines, a situation that led to the avoidable death of Ms Dhu. Nor did she speak against the grinding poverty that full time carers, largely women, experience because their labour is not recognised and the welfare system has been shredded for decades by her “beloved” party. She did not care about penalty rates cuts in hospitality and retail, which mainly hit low paid women.

No, Julie Bishop is no sister of mine.

We don’t need more women like her in politics; we need radical women in politics. We don’t need women who rage against the Liberal Party’s misogyny with one breath and slash welfare for single parents with the next, like former Labor prime minister Julia Gillard.

We need women like Bernadette Devlin, elected to the British parliament in 1969 as a socialist and voice for the Irish struggle against British occupation and for equal rights for Catholics. She took the fight up to the authoritarian, racist and imperialist traditions of Westminster – quite literally when she punched home secretary Reginald Maudling on the floor of parliament. Maudling had defended the actions of British troops who had gunned down unarmed civil rights protesters in Derry on what is now known as Bloody Sunday.

We need women like Debbie Kilroy from Sisters Inside, who campaigns tirelessly against a “justice” system that targets poor and Indigenous women. She fights for the lives of women like Tanya Day, a Victorian Aboriginal woman who died in police custody after being arrested for public drunkenness.

We need young women like Greta Thunberg, the 16-year-old Swedish climate activist who has taken on the rich and powerful responsible for destroying our planet. Her stand has helped inspire a global movement led, in many cases, by teenage girls who have gone on strike from their classes and taken to the streets to demand real action on climate change.

And we need women like 28-year-old Kath Larkin, a working class fighter who is the candidate for the Victorian Socialists in the Melbourne seat of Cooper. She was the first woman to be elected as a delegate for Rail Tram and Bus Union at Flinders Street Station and was central to the rank and file team that, four years ago, pushed for and won the first mass rail strike in 18 years.

As the old slogan goes, “A woman’s place is in the struggle”. We need more women in the struggle. Our struggle is against Julie Bishop and the women and men like her. 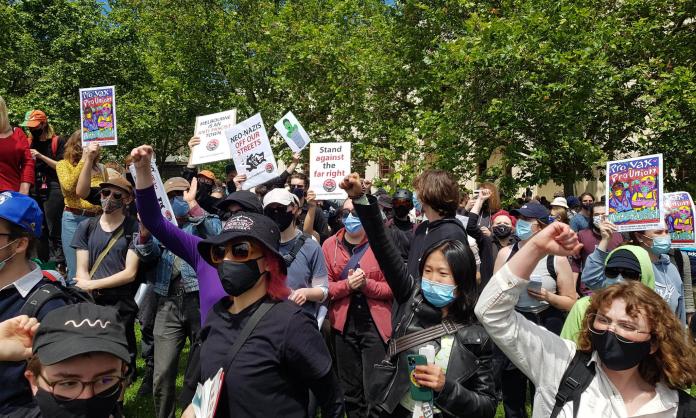