100 years on from the Somme, capitalism still breeds war 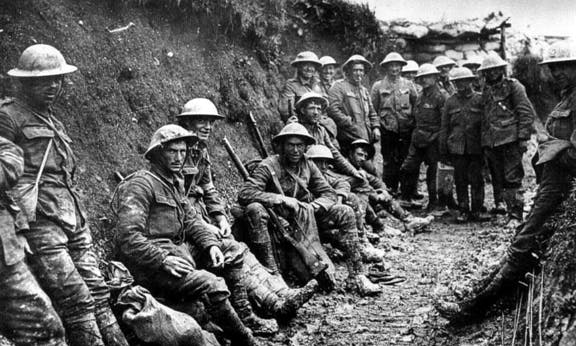 Reading the personal accounts of soldiers from the World War I Battle of the Somme, you’re struck by the strange matter-of-factness and lack of emotion. In the face of such extreme and senseless violence, words do fail.

In the diary of Walter Hutchinson, a British stretcher-bearer, we read: “We was fairly quiet from Wednes to the Friday teatime, then Fritz started shelling us again. I was talking to these three men some 10 yards away and a shell dropped and killed all three of them. It was an awful sight”.

The battle began on 1 July 1916. On that day alone, 60,000 British troops were killed or wounded. Wave after wave were ordered to fix their bayonets, clamber “over the top” and out on the charge toward enemy lines. No man’s land – a hail of bullets and explosions, mud and body parts flying through the air, soldiers running, mad with fear and exhaustion, expecting death at any moment – an awful sight.

The world today is pregnant with a violence that, in the potential scale of death and destruction, would put the Battle of the Somme in the shade.

As the Australian War Memorial’s account puts it: “The name ‘Somme’ has become synonymous with slaughter”. By the time the combined British-French offensive against German lines was halted on 18 November, the total dead or wounded on both sides numbered more than a million. The Allies had gained only around 10 kilometres of ground.

In the 100 years since, things are supposed to have changed. Military recruitment ads show war as a kind of technologically sophisticated backpacking adventure. No more bodies sent stumbling into the path of machine gun fire. Our wars are planned, targeted, precision guided.

This is all a facade. The “progress” over the last centuries is of the kind referred to by Walter Benjamin in his passage on the “angel of history”: “Where a chain of events appears before us, he sees a single catastrophe, which keeps piling wreckage upon wreckage and hurls it at his feet”.

The world had barely recovered its senses from the slaughter of WWI when the horrors of Nazism and WWII were unleashed. More awful sights: the fire-bombing of entire cities, the industrial-scale slaughter of Jews and other “enemy aliens” in the Nazi gas chambers and, in a last gruesome flourish, the first use of nuclear weapons, against the Japanese cities of Nagasaki and Hiroshima.

In its aftermath, institutions such as the United Nations were established, supposedly to create a new international order in which disputes could be settled peacefully. Yet the horror continued.

As the two main global super-powers of Stalinist Russia and the United States jostled for influence, the bodies kept piling up: the Korean war, the Vietnam war, the anti-communist massacres in Indonesia, countless proxy wars fought by global powers in South America, Asia, Africa, the Middle East. The only thing progressing was the weaponry, with nuclear Armageddon just the press of a button away.

The fall of the Berlin Wall and the end of the Cold War in 1989 were supposed to usher in a new, more peaceful age. As Francis Fukuyama famously put it, this was “the end of history”: the world would finally be united under the banner of Western liberal democracy.

But that was just cover for the US and other Western powers’ attempt to cement their dominance following the collapse of their main rival. A new wave of violence was unleashed. As US journalist Thomas Friedman explained, “The hidden hand of the market will never work without a hidden fist. McDonald’s cannot flourish without McDonnell Douglas, the designer of the F-15”.

Already in 1990, the US set out to bomb Iraq back to the Stone Age. Sanctions followed. This and other Western interventions in the Middle East provoked resistance. Then came the 9/11 attacks in 2001: blowback from the suffering inflicted by empire. The response was swift and brutal. New wars in Afghanistan and Iraq brought yet more death and destruction.

All the while, the global flashpoints have been multiplying. “How to invest for an Asian arms race” ran the headline of an article in the business section of the Age website on 13 July. In it, we learn that tensions in the South China Sea provide an opportunity to cash in on rising stock prices in “defence components and electronics, shipbuilding, aviation, weaponry and explosives”.

No matter that, as one analyst put it, “the world has not been in such peril since the Cuban Missile Crisis”.

A conflict between China and a regional power such as the Philippines would be devastating enough. A clash between China and the US would be a global catastrophe. As far as the world’s wealthy elite see it, however, all that is of no real consequence. There’s money to be made.

The history of the past 100 years has not been one of gradual progress towards peace and prosperity. The world today is pregnant with a violence that, in the potential scale of death and destruction, would put the Battle of the Somme in the shade.

We can do better. War isn’t part of human nature. If it were, it wouldn’t churn out, alongside the piles of corpses, so many traumatised and broken human beings. For most of human history, people lived in small egalitarian communities for which such a thing as war was completely unknown. It’s class society, and in particular capitalism, that has made war such a permanent feature of our recent history.

Capitalism breeds war. At its centre is the drive to profit –a drive that pits individuals and nations against each other in a mad global scramble for control over resources and markets. It is a system that, in Karl Marx’s words, came into the world “dripping from head to foot, from every pore, with blood and dirt”. If we let it go on, it will end that way as well.

Next year will mark another centenary. In 1917, the workers of Russia rose up against war and capitalism, hastening the end of a conflict that had sent tens of millions to an early death. To the ruling classes of Europe and the world, it was, indeed, an awful sight. For the rest of us, it is a powerful example to follow in the struggle for a world without war.