Students taking a stand for Yes
by Chris di Pasquale

With some 200,000 young people in Australia between 18 and 24 not enrolled to vote when the marriage equality plebiscite was announced, the National Union of Students (NUS), along with campus student unions and Victorian Trades Hall Council, went into campaign overdrive.

We ran daily stalls on university campuses where students could enrol electronically, talked to students about why they needed not only to enrol, but also to vote Yes and convince those around them to vote Yes. While young people are less likely to be enrolled, it’s among young people that there are the highest rates of support for marriage equality – 81 percent among 18-24-year-olds.

During the first week of the enrolment period, NUS launched our “NUS says YES” campaign, with campus protests and speak-outs everywhere from Curtin University in Perth to Griffith University on the Gold Coast. These speak-outs were a great focal point to convince students not only of why they should vote, but also why they should get involved in the campaign for the rest of the semester.

A postal vote by its very nature is an individual and atomising process, so student activists are determined to run a visible, activist campaign that emphasises collective action. Following on from the 20,000-strong Melbourne rally, major demonstrations are planned in support of the Yes campaign in other cities, organised by groups such as Equal Love and Community Action Against Homophobia. NUS is organising student contingents to attend these events.

In addition, we’re hosting student days of action in all major cities to keep up the energy and the momentum of the Yes campaign. This will be an opportunity for students and young people to put forward our own positive narrative and counter the right’s bigotry and homophobia.

Young people and students have been the lifeblood of the 13-year campaign for marriage equality. We want to make sure that now, in what may be the final leg, we don’t give up the protests, the activism and the defiance – now is the time to turn it up. 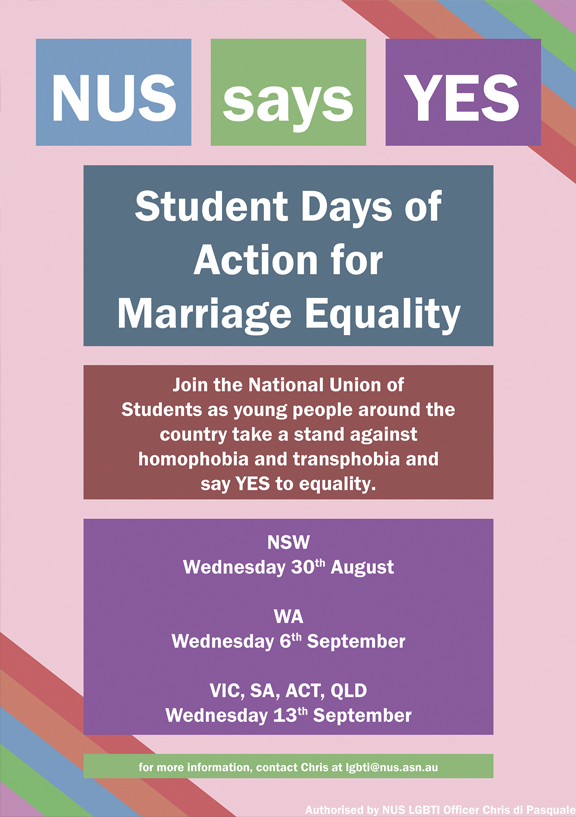 Chris di Pasquale is a teacher and a member of the Independent Education Union.