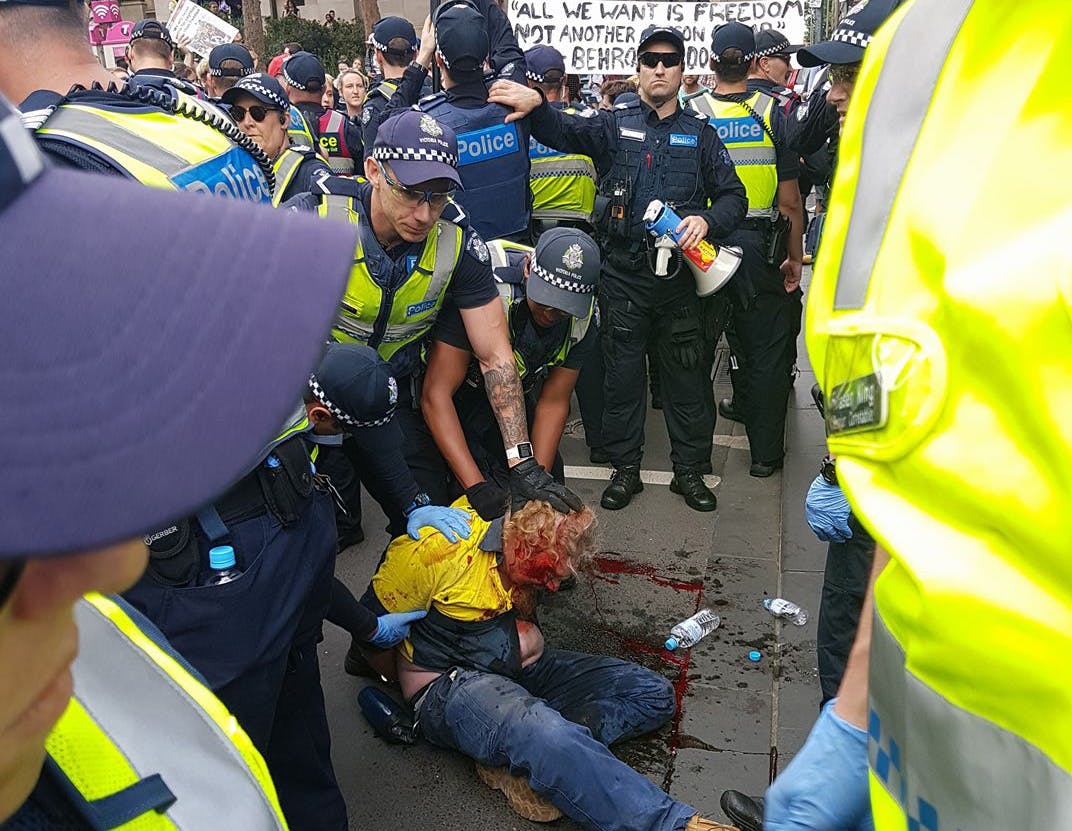 For three weeks refugees in the Manus prison camp have heroically resisted a siege. The Australian government has been attempting to break the men on Manus by scattering them between different prisons on the island. All food, water, electricity and medical support has been cut off since the end of October.

Despite the pressure, and the threats of dysentery and cholera from the horrendous conditions they have endured, the refugees stood firm. With incredible ingenuity and with some support from locals, they were able to survive the siege.

Unable to starve them into submission, the Australian government and the PNG police decided to break the resistance with brute force. On Thursday and Friday this week PNG police, with the support of the Australian government, stormed the camp and attacked the nearly 400 men who have held out. They used metal rods and sticks to beat the men. Dozens were bashed. Their personal possessions were trashed. Any refugee caught filming the attack had their phone confiscated, a blatant attempt to silence the men and to stop the world knowing the horror that was unfolding. Refugee protest leaders were also targeted. Behrooz Boochani, the renowned Kurdish journalist and spokesperson for the refugees, was arrested and escorted out by police to try and demoralise the men. In the end they were forced to board buses for new prison camps.

Emergency protests have taken place across Australia to demand the refugees on Manus be evacuated immediately and brought to the mainland. In Melbourne, every protest in the past few weeks has been met with hundreds of police, including riot police and the mounted branch, blocking refugee protestors from marching through the CBD. In particular, they have attempted to prevent the rallies from getting to Flinders Street, which is the busiest intersection in the city.

Last night our protest was attacked by Neil Erikson, a Melbourne-based fascist who has recently been terrorising local councils for supporting an end to council sponsored celebrations of Australia Day. Erikson stormed the protest platform, grabbing the microphone and yelling that all the refugees were rapists and should be deported.

A participant in the crowd came to the defence of the rally platform and pushed the fascists away. He was head-locked by one of Erikson’s fascist goons. But it wasn’t the fascists who were tackled by the police. Within moments the police had the anti-racist protestor on the ground, his head pressed into the concrete. He reported the police stomped on his calves, his legs were kicked by the police and elbows shoved into his back. Meanwhile, the fascists were simply walked away under police escort.

Speaking to me about why he took on the fascists, Luke said: “It is important for the community to reject these views. Whenever the fascists organise we need to show we reject them. Otherwise it gets normalised and accepted.”

All Luke was doing was what the police should have been but weren’t – trying to stop a violent attack on a peaceful protest by known fascist goons. For that he was beaten to the ground and arrested, while the instigators of the violence were treated with kid gloves. Footage posted by the fascists show them chatting with the police in a friendly manner minutes after the event.

The police treated the anti-racist demonstrators completely differently. When people demanded they release Luke police moved in with force, throwing people to the ground. One man, a well known left wing activist, had his head cracked open from hitting his head on the ground. Blood gushed from his head. For over 30 minutes the police refused the man medical attention. Riot police surrounded him, and no ambulance was called. The refugee rally came to his defence, chanting “where is the ambulance?” Still bleeding, the man was dragged to a police van and arrested. For over an hour we surrounded the van to demand he be released but despite our efforts, he was driven away to a police station.

We refused to be cowed by the police brutality and were determined to take our message of solidarity with the men on Manus through the streets of Melbourne. Hundreds of people challenged police lines and demanded the right to march. Some were pepper sprayed. But eventually we made our way through so that we could march through the city streets, finally reaching the Flinders Street intersection. It was a small victory for the right to protest and an important show of our determination to fight alongside the refugees for an end to the barbaric offshore detention regime.

The violence of the Victoria police that we saw on the streets of Melbourne is only a taste of the brutality that the refugees have had to face. We need to stand up against state violence on Manus and on our streets.

We will be protesting again for the refugees on Manus on Sunday at 11am. We will gather in the Bourke Street Mall before marching to Federation Square to join the Get Up! protest.

For 350 years, Dutch colonialism oversaw a system of brutal exploitation and repression in Indonesia. But in 1945, a mass movement defeated the colonial regime, despite the imprisonment, torture and execution of thousands of independence activists.

From crisis to catastrophe in China
Robert Narai

Video footage from late December shows elderly patients infected with COVID-19 on stretchers receiving oxygen stored in large blue bottles. They are being treated on the road outside the emergency department of Zhongshan Hospital, one of the largest in Shanghai.