Right on the march in Germany 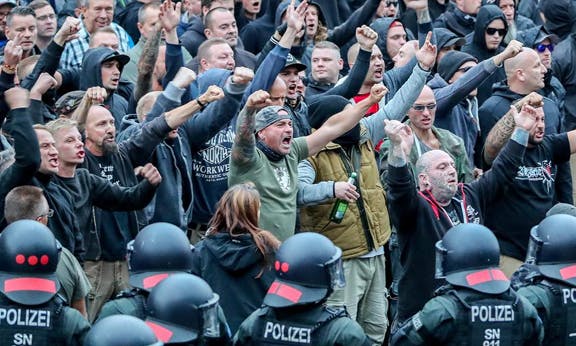 Mass demonstrations and riots by the far right in the German city of Chemnitz in August have sent shockwaves around the world. Scenes of thousands of protesters, many giving Nazi salutes, marching through the historic city attacking people of colour and clashing with counter protesters have been seen by millions.

The march comes in the context of a pogrom-like atmosphere whipped up by mainstream politicians, media and local fascist groups, which blame immigrants for the killing of a man in the city.

The racist riots come off a long history of far-right organising in the state of Saxony, where Chemnitz is located, and take place in the context of an increasing shift to the right in mainstream German politics over recent years.

Since the arrival of over one million mainly Syrian refugees in 2015-2016, there has been a growing mood of open hatred, scapegoating and marginalisation of refugees, Muslims and people of Middle Eastern background

A key manifestation of this has been the rapid growth of the far right AfD (Alternative for Germany).

In a few short years the AfD has grown from a small and fringe party to one that has become the country’s second most popular. Polling conducted after the Chemnitz riots have put the AfD on 17 percent federally, ahead of the Social Democratic Party on 16 percent. Only Merkel’s conservative Christian Democratic Union (CDU) outpolls the AfD, with 28 percent support.

The AfD promotes itself as a party of German nationalism, arguing that Germans should not be made to feel ashamed of the country’s Nazi past. They strongly oppose refugees being accepted into Germany, oppose Muslim immigration, and blame these groups for social decay, poor public services and unemployment.

It’s little surprise that this argument has traction in the former east, of which the state of Saxony is part.

Modern Germany has been formally unified for 28 years now, but in many ways remains divided.

The east remains far poorer than the west. Indeed, the GDP per capita in most eastern states is around €28,000, whereas in most western states it is above 35,000. In Germany’s wealthiest industrial cities such as Hamburg and Bremen, the average citizen has nearly double the income of the average east German.

But wealth is not the only divide, or the most significant. East Germany was under some form of authoritarian rule from 1933 until 1990 – nearly 60 years. The Nazis ruled from 1933 and quickly abolished all democratic institutions including rival political parties, trade unions, media and any elements of political and civil opposition.

After the Nazis’ defeat, the east was occupied by the Stalinist USSR, which set up a vassal state under its influence – the German Democratic Republic, or East Germany – which was an oppressive dictatorship from its inception in 1949 until its demise in 1990.

With reunification, all of the modern institutions of West German capitalism were simply imposed onto the east as it was absorbed politically and economically, including in the state of Saxony.

Saxony has long been a hotbed of far right activity. In the 1990s, right wing movements converged on Saxony because it offered greater protection from the more aggressive surveillance and break-up tactics of the police in other states. And the state has been at the forefront of the recent revival of far right activity.

The anti-Islam party Pegida has held demonstrations in Saxony’s second city, Dresden, every year since 2014. These have been the scenes of intense fighting between left and right. Notably, the right wing demonstrations have been protected by the police. The largest of these was in 2015 when 25,000 Pegida supporters marched.

Mainstream politics in Saxony is also more right wing than in the rest of Germany. Saxony has had a conservative government for the entirety of its post-reunification history.

The president of the state of Saxony is from the right wing of the CDU. He is known as an outspoken hardliner, and for using provocative language including using the term “Fatherland” to describe Germany, praising Hungary’s hard right government and railing against political correctness.

With the economic and employment situation so much worse in the east, and no left wing organisations or traditions to provide a credible alternative, the terrain is left wide open for the far right.

Nevertheless, there has been a heartening show of opposition to racism and fascism. After the Chemnitz riots more than 50,000 people attended a massive anti-racism concert in the city centre. In Berlin 10,000 protested, and there have been further rallies in support of migrants and refugees in other parts of Germany.

The sheer scale of the counter-protests in the wake of the Chemnitz riots is a cause for optimism in these seemingly bleak times, and vindication of the anti-fascist German slogan Wir sind mehr: “there are more of us”.

Revolutionary Marxists argue that socialism is possible only if the working class leads a revolution. So why organise among students?