‘Scomo’s got to go’: Tens of thousands march for climate action

Tens of thousands of people took to the streets in cities and towns around Australia today in protest against the government’s handling of the bushfire crisis and their continuing refusal to act on the climate emergency. The rallies were organised by Uni Students for Climate Justice, but drew in wide layers of the community, including bushfire victims, firefighters, Indigenous Australians, trade unionists, high school students and many others.

In Melbourne, an estimated 30,000 people turned out despite drenching rain and in defiance of the pressure placed on organisers by police and the state Labor government to call off the rally on the spurious grounds that it would draw emergency services resources away from dealing with the fires. 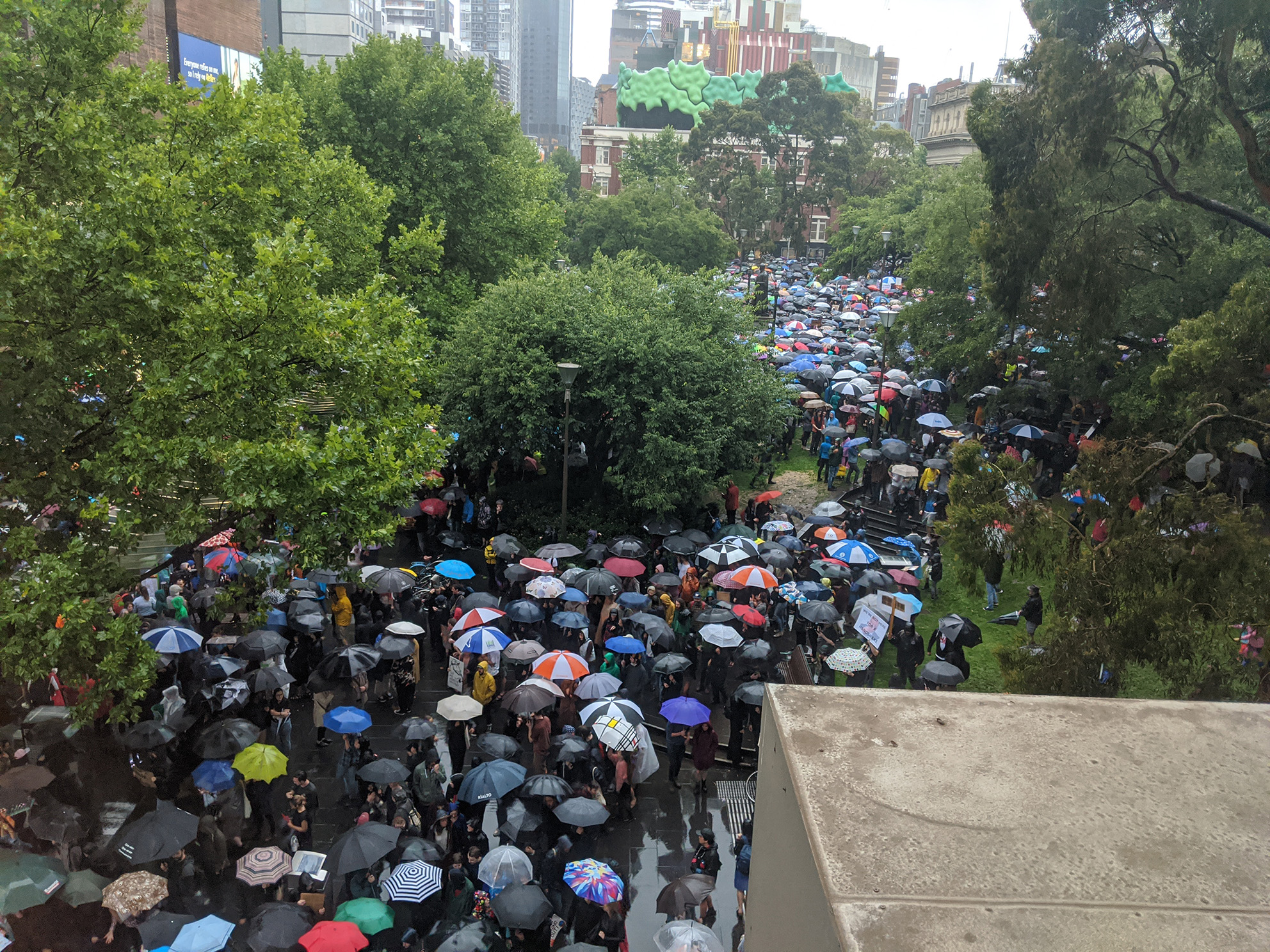 It seems most people weren’t put off by the government’s scaremongering. In the lead-up to the rally, many pointed to the fact that there were no similar claims of “diverting police resources” when it came to the Boxing Day cricket match or New Year’s Eve celebrations 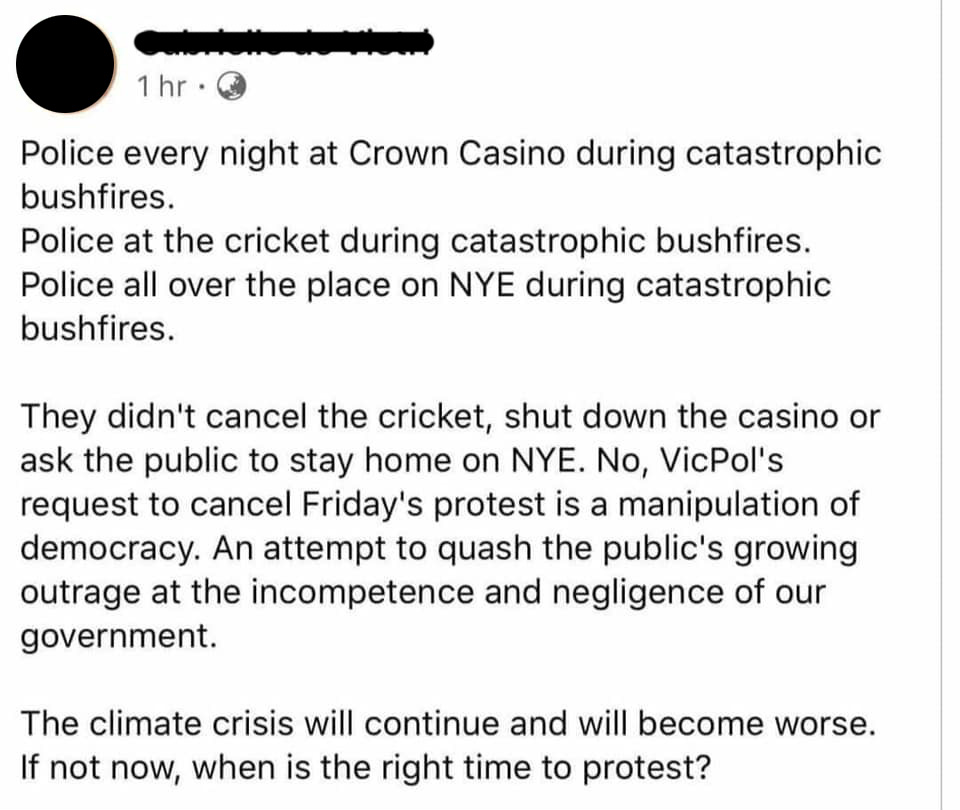 In his speech to the rally Jerome Small, from the Victorian Socialists, gave a searing indictment of Australia’s ruling elite: "It's not a case of 'forgive them, they know not what they do'. The most powerful people in this country, the most powerful people in the world: they know what they're doing and they've been doing it for decades. What they're doing is stacking up the cash while the the country burns. That's what we're up against." In Sydney an estimated 50,000 gathered at the Sydney Town Hall before marching through the city to the NSW Parliament and on to Hyde Park.

The rally was chaired by Indigenous activist and Uni Students for Climate Justice co-convenor Gavin Stanbrook. Opening the rally, he said “We’re here today to demand the full funding of national fire services, and national community support services for those that have been left behind by the government. And we’re here today to hold the climate criminals – the CEOs, the mining companies, the politicians – to account.” Firefighter Jim Casey also spoke. “I’ve been a professional firefighter for 20 years and I’ve seen nothing like this,” he said. “We need to talk about the resources. Emergency services need more! There has been a $20 million cut to fire rescue. There’s been a 35% reduction in firefighting services in the national parks service since the Liberals took power… ‘How are you going to afford it?’ people ask. Tax the companies that are extracting fossil fuels and creating this problem!” Indigenous activist Lizzy Jarrett also spoke. “It’s time for the total dissolution of this government. Morrison, the whole government. Everyone! Start from scratch!” Thousands gathered in other cities too: 5-7,000 in Brisbane, 8,000 in Adelaide, 3,000 in Canberra, 1,500 in Perth, and hundreds in regional cities and towns including Geelong, Byron Bay and Port Macquarie. Absolutely huge #climate rally in Adelaide right now and getting bigger by the minute screaming out #ClimateActionNow to ⁦@ScottMorrisonMP⁩ and all politicians #auspol #sapol ⁦@350Australia⁩ ⁦@FossilFreeSA⁩ pic.twitter.com/Lx1RPUgSRy

They’re chanting #SackScoMo - or words to that affect - at #Canberra climate action rally. Large and diverse(ish) crowd on a v hot day. pic.twitter.com/TAb4sWgjh6 It seems people weren’t convinced by the argument, waged by the federal government, the state Labor government in Victoria, and others, that “now isn’t the time for protest”. One thing was clear: people are sick of our political leaders fiddling while the entire country is burning around them. The anthem for these protests could have been the Rage Against the Machine classic “Guerilla Radio”: “It has to start somewhere. It has to start sometime. What better place than here? What better time than now?”

Federal Climate Change Minister Chris Bowen believes that reaching 82 percent renewables in the power generation industry and delivering a 43 percent reduction in emissions would be “arguably” the biggest Australian economic development since before World War Two.

Prisoners inside Western Australia’s only youth detention centre, Banksia Hill, heralded the new year with an act of resistance—burning a building to the ground and climbing to the top of the prison’s perimeter fence. A look into the daily conditions faced by these young people, many of them Indigenous, shows why they would want to fight back against this horrendous institution.

The Queensland Labor government has strengthened the powers of police and the courts. Many of the new laws, announced in late December, target juvenile offenders. They include raising the maximum penalty for stealing a car to ten years imprisonment, building two new youth detention centres and increasing the scope for courts to impose tracking devices on youth detainees.

In the twelve months that we have been forced to “live with” COVID-19, average life expectancy in Australia has fallen for the first time in generations. As of October, 8,832 people were counted as dying from COVID-19, and thousands more died “with” the virus. The Australian Bureau of Statistics estimates that, just like rents, fuel and electricity prices, deaths were up in 2022 by 17 percent—18,671 more than the recent average.