When Trotskyists fought back against New York's Nazis

On February 20, 1939, the stars and stripes waved next to the swastika in New York's Madison Square Garden. An enormous crowd sang the Star-Spangled Banner while giving the Hitler salute. Guards in grey uniforms inspired by those of the Nazis' paramilitary wing stood at attention in front of a 30-foot portrait of George Washington.

The German American Bund had filled the Garden with 20,000 supporters. Attempting to shake their image as a sauerkraut-munching Hitler fan club, the Bund draped itself in the banner of Americanism and celebrated Washington's birthday. Banners proclaimed "Wake up America!" (copied from Hitler's "Deutschland Erwache!"). The rally was protected by 450 uniformed stormtroopers from the Bund's Order Division, their version of the Nazis Sturmabteilung or "Storm Division."

The speeches by the Bund's leaders highlighted their inability to build a mass movement of declassed petit bourgeois in the U.S. They barely offered the social demagogy about jobs and wages that had been so skilfully employed by Hitler. Here, the radio priest Father Coughlin was a better contender to lead American fascism. The speeches by the Bundesführer Fritz Kuhn and his lieutenants, in contrast, offered nothing but anti-Jewish diatribes.

This rally from 1939 has gotten more attention recently. A 7-minute film with images of the rally was nominated for an Oscar this year. Bernie Sanders mentioned it in his big speech about democratic socialism this summer. It's easy to see why: Watching the Bund rally, when we see the 26-year-old hotel worker Isadore Greenbaum jump onto the platform to protest, where he is first beaten by Nazi guards and then by cops, it is hard not to think of a Trump rally.

Less well known is that on that evening, the Garden was surrounded by at least 50,000 antifascists. Who had organised that counter-demonstration rally?

It was not the Socialist Party of Norman Thomas, nor the Social Democratic Federation, nor the Communist Party. None of New York City's Jewish newspapers had called on their readers to protest. In fact, the Forward declared: "Avoid the area around Madison Square Garden today and do not participate in any demonstration around the hall."

The organisation that initiated the call was the Socialist Workers Party (SWP): America's Trotskyists. Far more people turned out than the SWP, with just a few hundred members in New York City, could organically mobilise. Their call to action was reproduced in the New York Daily News on the morning of the rally. But other left-wing organizations did not want to antagonise the administration of Fiorello La Guardia, who had been elected with working class support. And perhaps crude sectarianism prevented them from joining any Trotskyist initiative.

Nonetheless, the SWP had hit a nerve. At 6pm, when the party's members arrived on Eighth Avenue in four "squadrons," they found the streets were already filled. Felix Morrow wrote:

The fighting anti-fascists who answered the call of the Socialist Workers Party were of many types. Among those who pressed against the horses, fighting for every inch of ground, were Spanish and Latin-American workers, aching to strike the blow at fascism which had failed to strike down Franco; negros [sic] standing up against the racial myths of the Nazis and their 100% American allies; German-American workers seeking to avenge their brothers under the heel of Hitler; Italian anti-fascists singing Bandera Rossa; groups of Jewish boys and men, coming together from their neighborhoods, to strike a blow against pogroms everywhere; Irish republicans conscious of the struggle for the freedom of all peoples if Ireland is to be free; veterans of the World War; office-workers, girls and boys, joining the roughly-clad workers in shouting and fighting; workers of every trade and neighborhood of the city.

These protestors ran up against the largest police force New York City had deployed against a single demonstration. 1,780 police on horses, which the SWP referred to as "LaGuardia's cossacks," were defending the Nazis' right to "free speech." Street battles continued for five hours, teaching workers an important lesson about the character of America's "democratic" police. 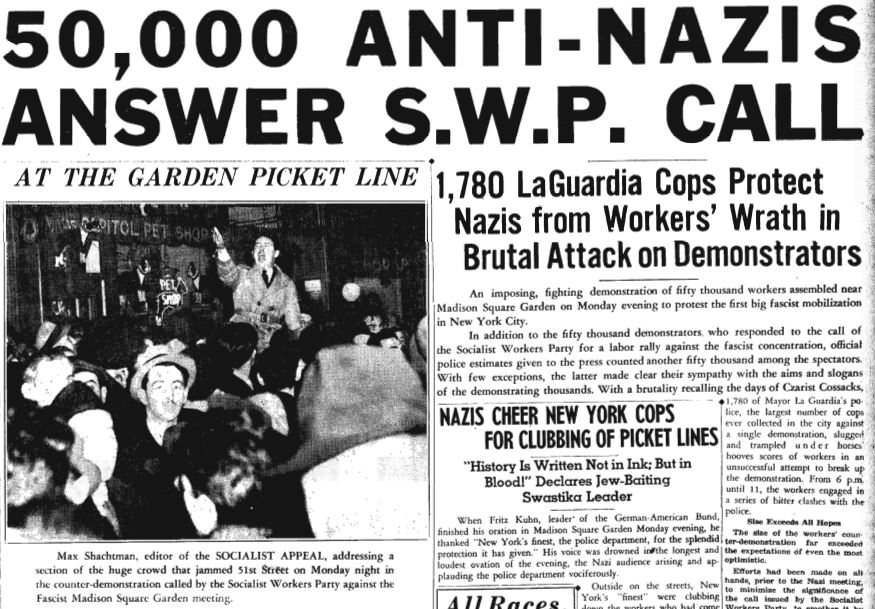 New York's Zionist organisations had also failed to mobilise against the Nazis. The SWP reported that they had visited the offices of the Zionist youth organisation Hashomer Hatzair (The Young Guard) on the Lower East Side before the rally. There they were told: Sorry, but we can't join you. Our Zionist policy is to take no part in politics outside Palestine."

The SWP responded on March 7 with an editorial calling for an "end to Zionist illusions." They criticized that the Zionists had "staked everything" on the support of British imperialism, thus wasting the “energies and minds and hearts of millions of Jewish men and women and boys and girls – not to speak of the hundreds of millions of dollars it took.” The Trotskyists countered:

It is an immediate task of our party to get those boys and girls out on the picket line with us next time, to awaken the Jewish people to the realisation that the fight against anti-Semitism, which is the fight against fascism, is here and now!

This appeal did not go unheeded. In 1939, the Nazis' machinery of genocide was lurching into motion. Yet the Zionist movement, even its socialist currents, did not have any answer to except for the aliyah, emigration to Palestine. They were opposed to any other aid to European Jews, as David Ben-Gurion declared:

If I knew that it would be possible to save all the children in Germany by bringing them over to England, and only half of them to Israel, then I would opt for the second alternative.

The Roosevelt administration was enforcing quotas that blocked any Jewish refugees from the U.S., and American Zionists were at best ambivalent about this. It was left to the Trotskyists to demand: "Enough Pious Tears! Admit the Refugees!"

Jewish young people all over the world were aching for a fight against Hitler. And all over the world, we find cases of activists who abandoned the Zionist movement and joined the ranks of the Fourth International. The list of Hashomer Hatzair militants that became Trotskyists is astoundingly long. It includes: Jakob Moneta and Rudolf Segall, German Jews who had emigrated to Palestine but left their kibbutz and joined the Trotskyist group in Haifa, later becoming leaders of the Trotskyist movement in West Germany; Moshé Machover, a founder of the Israeli socialist organization Matzpen in 1962 (who was recently suspended from the Labour Party in the UK for "antisemitism"); Dov Shas, who fought in the resistance in Romania, and joined the Israeli Trotskyist nucleus around Jakob Taut; Baruch Hirson from South Africa, a Trotskyist who was imprisoned in 1964 for sabotage actions against the Apartheid regime; the intellectual Boris Fraenkel; Chanie Rosenberg, best known as the widow of Tony Cliff / Yigael Gluckstein; Henri Weber, a leader of the Revolutionary Communist Youth during May 1968 in France; and Christian Picquet, who in 2009 left the New Anticapitalist Party to join the Left Front.

But the most famous Zionist-turned-Trotskyist is without doubt Abraham Wejnstok, known by his pseudonym Abraham Leon. As a leader of Hashomer Hatzair in Belgium, Leon set out to write a materialist history of the Jewish people. In the form of theses, he explored how antisemitism had been produced and reproduced over the millennia in different class societies, and came to the conclusion that modern antisemitism was a product of capitalism's decay. These theses were published, after his murder in Auschwitz in 1943, as the book The Jewish Question: A Marxist Interpretation.

Drawing the conclusion that Jewish oppression could only be ended by smashing capitalism, Leon left the Zionist movement and joined the underground Trotskyist organization in occupied Belgium in 1940. In fact, Leon became the central leader of the Revolutionary Communist Party. He recruited a 17-year-old Ernest Mandel as well as a German emigrant who had himself been a leader of the Zionist youth movement in that country.

Martin Monath had fled from his native Berlin to Belgium in 1939. He had been a leader of Hashomer Hatzair and spent on a year on a Danish farm training to be a settler in Palestine. But in Brussels under Nazi occupation, Monath joined the Trotskyists. All over the world, former Zionist activists chose the path of revolutionary struggle instead of emigration — Monath's story is one that I recently discovered in my research.

By 1943, Monath was in France leading the Trotskyists' "fraternisation work" and organizing German soldiers into resistance cells. He published the newspaper Arbeiter und Soldat that called on the "workers in field grey uniforms" to turn their weapons against their Nazi officers. Several dozen soldiers joined these cells before the Gestapo was able to smash them.

This small experience in north-western France might be the greatest example of internationalism during World War Two. That war is often presented as a war between nations — but here we had French and German Trotskyists, alongside German soldiers, fighting against French and German fascist police.

Today in the U.S., we are seeing a resurgence of Jewish activism against ICE concentration camps and the shift to the right. With the ongoing and deepening Great Schism between the Israeli state and Jews in the U.S., there is a search for new Jewish identities. This is the context of the campaign to equate any criticism of the Israeli state of antisemitism. Remembering the stories of Jewish radicals who broke with nationalism and joined the revolutionary socialist movement, protesting against the Nazis in Madison Square Garden and organising anti-Nazi cells in Hitler's army, could not be more relevant.

This essay is partially adapted from Nathaniel Flakin's biography of Martin Monath, which was recently published by Pluto Press.

If working-class people had real power, what would society look like? If you live in Australia’s largest city, you don’t have to look far to find an answer. If you’ve ever seen the Sydney Opera House, you’ve seen a building constructed under workers’ control. If you’ve ever strolled through the Rocks, you’ve walked through a historic area that organised workers saved from demolition.

In jail for her anti-war stance in 1916, Rosa Luxemburg, the great Polish-German revolutionary, wrote what became known as The Junius Pamphlet:

Lessons from the rise of Mussolini
Luca Tavan

One hundred years ago, in October 1922, Benito Mussolini’s paramilitary blackshirts marched on the Italian capital to demand the dissolution of the government of Prime Minister Luigi Facta. The March on Rome is the foundational myth of fascist power. Through this daring act, so the story goes, the strongman Mussolini installed himself as head of the Italian government.

On the counter-revolution in Russia
Sandra Bloodworth

The anniversary of the Russian Revolution—25 October 1917—is a day of commemoration for socialists. The revolution remains the only time workers have overthrown the ruling order and, in so doing, opened up the possibility of socialism. It represented everything the world’s ruling classes fear and despise, and they unleashed horrific barbarity in response. So at the same time as celebrating the revolution, we must never forget what was done to crush the spirit of rebellion.

At 9.30am on 3 October 1952, a mushroom cloud billowed up above the Monte Bello Islands, 130 kilometres off the coast of Western Australia. The next day, the West Australian reported: “At first deep pink, it quickly changed to mauve in the centre, with pink towards the outside and brilliantly white turbulent edges. Within two minutes the cloud, which was still like a giant cauliflower, was 10,000 feet [three kilometres] high”.

We shouldn't be lectured by Gillard
Diane Fieldes

On the afternoon of 9 October 2012, then prime minister Julia Gillard famously declared in parliament, “I will not be lectured about sexism and misogyny by this man, I will not. Not now, not ever”.