The evidence is in: lockdowns work 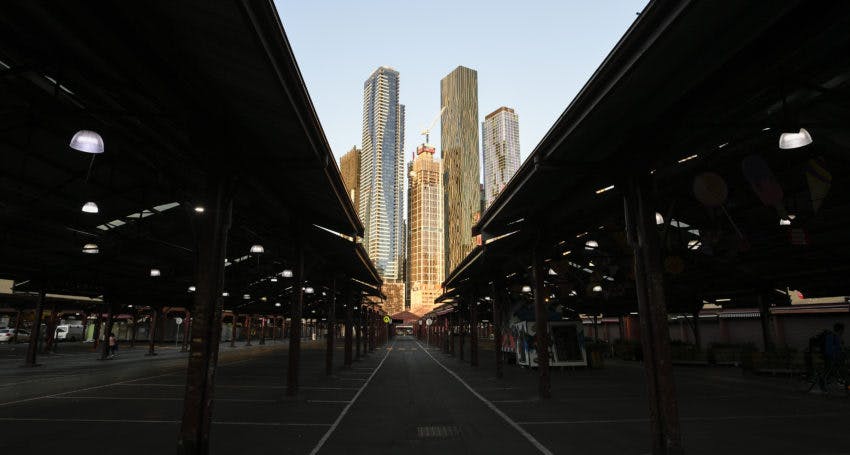 On 30 July, Melbourne recorded 721 cases of coronavirus. The growing crisis pushed Premier Daniel Andrews into implementing a statewide lockdown that involved shutting down non-essential industries and curtailing a range of social activities. Now, as much of the world grapples with a second wave of the deadly virus, Melbourne has recorded zero daily cases for nearly two weeks.

Most Victorians are celebrating the easing of restrictions, pleased that their sacrifices have paid off. That they overwhelmingly abided by the restrictions reflects a strong sense of social solidarity, and countless lives have been saved as a result. So while it is true that the second wave was a product of the Andrews’ government’s neoliberal approach to managing the quarantine program, it must now be judged by its response to that wave. On the whole, the government has been overwhelmingly effective.

Despite this, Andrews has for months now been the target of vicious attacks. In the topsy-turvy world inhabited by the political class, the true calamity of 2020 is not the deadly virus that has killed more than a million people globally, but the measures that have successfully prevented that from happening here in Australia.

On the frontlines of this despicable campaign have been the owners of cafes, restaurants and beauty parlours, tormented by the thought of Melbournians being denied access to their precious enterprises. Provided with an enormous platform by the corporate media, these small-minded scum insisted on their “right” to reopen, even if it meant sending thousands to their graves.

Big business interests have been driving the anti-lockdown offensive. The Australian Industry Group spent late September and all of October campaigning for various bans to be lifted, as did CEOs from the airline industry, crying poor despite receiving billions in government handouts and sacking tens of thousands of workers. Egged on by former Premier Jeff Kennett, the state Liberals did their best to sabotage the containment strategy, cynically using the real failures of the Andrews’ government to justify a “let it rip” approach.

The media backed this campaign to reopen the economy. Relentless coverage of opposition to the lockdown was designed to create the illusion of mass public hostility. They seemed undeterred by the Roy Morgan poll of 10 September, which found that 70 percent of Victorians supported the government’s management of the virus. Herald Sun columnist Andrew Bolt did his part to promote the corporate death cult, advising Victorians to “trust Trump more than a vaccine”. It appears that Bolt has not yet injected bleach to ward off the virus, a lapse of faith that will hopefully be rectified soon.

From the perspective of these billionaires and their hired stooges, the only thing that matters in this world is the economy. And when they say the economy, they don’t mean eliminating unemployment and producing what people need to live and be happy. They mean profits.

This debate has taken on new urgency given the new wave sweeping Europe and the US. The argument has been made that the treatment is worse than the disease, that society “can’t afford” another lockdown. In the time it took Victoria to go from 721 to zero cases, caseloads in Britain and France exploded from 846 and 1,377 per day to more than 20,000 and 47,000 per day, respectively. The US is now registering 130,000 new infections per day.

Thousands of working-class people have paid the price for this criminal approach. The virus’ victims are disproportionately elderly and people of colour from the working class. Lockdowns that prevent these casualties are not simply a necessary public health response, they are a fundamentally pro-worker policy that acknowledges human beings as more important than corporate profits.

This is the strongest retort to liberal columnists who cynically play on fears of a mental health crisis to erode faith in public health measures. How exactly would allowing the virus to kill thousands of our families, friends and workmates improve our collective mental health?

It is also a rejoinder to those on the left who have misunderstood what is at stake in the lockdown debates. It is right to oppose attempts to limit our right to protest and strike. Yet it is fundamentally misguided to see the main enemy in this crisis as state authoritarianism. In fact, the preferred choice of capitalists around the world is to keep economies free and open, not to limit them or implement fascist dictatorships. The successive fights led by the British teachers’ union to shut down schools—in the face of opposition from the Labour Party—is indicative of an approach that builds workers’ power by challenging the corporate-dominated priorities of governments.

Far from being counterposed to tracking and tracing, as it is often portrayed, the lockdown bought the government much-needed time to establish a more capable system, which could plausibly prevent future cases from developing into a third wave. In any case, tracking and tracing every contact of those who test positive becomes exponentially more difficult with rising caseloads, while lockdowns—even partial ones—provide some buffer for inevitably bureaucratic errors. (Tracking and tracing are now impossible in those countries where the virus has entrenched itself.)

While lockdowns can disproportionately impact poor and vulnerable people, the solution is to demand more social and economic support, not to abandon trying to contain the virus altogether. The enormous state spending on wage subsidies and corporate welfare during the pandemic is proof that there is plenty of money in the system for such demands to be met. What is needed is a serious fight by unions and the left to ensure that support goes to those who need it most, not the bosses.

Even at an economic level, the evidence is mixed regarding the impact of lockdowns. Research published by the McKinsey Institute found that a comprehensive lockdown, when accompanied by investment into tracking and tracing capacity and other ongoing public health measures, can be better for the overall health of the economy than pretending it doesn’t exist. A 17 August article summarising the institute’s research reported: “The cost of getting the virus under control is likely measured in the billions, or perhaps hundreds of billions, of dollars. But it is also clear that the opportunity cost of waiting is almost surely measured in unknown thousands of lives and trillions of dollars”.

Though it is too early to make a final assessment, the relatively strong economic growth seen in countries like China, South Korea, Taiwan and Australia, would vindicate this analysis. It suggests that getting the virus under control is beneficial in the long run, even if the short-term economic impact is severe. By contrast, the belated and haphazard lockdowns in Europe are likely to be the worst of all words: dragging down their economies while being too short to seriously contain the virus.

Of course, to be effective and humane, lockdowns need to be accompanied by generous social support measures to ensure people can isolate in comfort. While there is much that can be improved upon, Australian citizens—as opposed to backpackers, international students and many refugees—benefited from a temporary doubling of the welfare payments and the introduction of the JobKeeper program. If there is another lockdown, we will have to fight to ensure that similar measures are reinstated and extended to cover all who reside within our borders.

Services for vulnerable population, such as those dealing with mental illness or domestic violence, also need to be substantially improved. Adequate and properly targeted public health messaging is needed to deepen our collective understanding of how the virus spreads, and to maintain public support for the necessary preventative measures.

The experience in Australia adds to the growing evidence that lockdowns not only work, but can effectively eliminate the virus if imposed properly. With the political will to implement such an approach, there is no reason why this couldn’t be replicated internationally. The degree to which the virus has already spread means that this will be more socially and economically devastating than it had to be. The profit-first priorities of politicians should be held responsible for this terrible failure. Still, for further COVID-19 deaths to be prevented, lengthy lockdowns matched with boosted welfare services are our best bet.