With the emissions reduction targets pledged in Kyoto, Japan, in the 1990s fading into distant memory, 2050—safely distant in time—has become the new favoured target date for the people making money from fossil fuels. As the Arctic permafrost melts and biodiversity collapses, “net zero by 2050” promises are an attempt to bullshit the public while allowing business as usual to continue undisturbed.

The “net zero by 2050” goals now espoused by the US, Canada, the EU, the UK and South Korea (and China’s similar 2060 pledge) are premised on the assumption that forthcoming technologies will facilitate the removal of greenhouse gasses already in the atmosphere. Such geoengineering schemes, they hope, will allow economies to keep churning through oil reserves while still achieving net neutrality.

The authors of the IPCC’s 2018 report advocate these carbon-capture pathways while admitting that “no proposed technology is close to deployment at scale” and that “there is substantial uncertainty about the adverse effects of large-scale CDR [carbon dioxide removal] deployment on the environment”. As Ben Ehrenreich noted in the New Republic, they are “more willing to gamble on potentially destructive technologies that do not currently exist than to even run the math on a more substantive economic transformation”.

The case of Australia makes obvious the truth that 2050 goals are not worth the paper they’re written on. In early February, Prime Minister Scott Morrison announced that Australia would reach net-zero emissions “as soon as possible”, preferably by 2050. “We welcome this move”, wrote representatives of ClimateWorks Australia in the Conversation. “A net-zero goal will provide clarity, lift ambition and create focus.”

That Morrison’s vague “goal” could be considered ambitious speaks to the dire situation in Australia. It deserves mockery from climate activists. This is the same government promoting a gas-fired economic recovery that will guarantee high emissions for decades to come, especially when you consider the emissions resulting from Australia’s export of gas to the rest of the world.

Guardian Australia’s environment editor, Adam Morton, argues that US President Joe Biden is leading a “breathtaking” global charge that will force even Morrison to act. “How Biden intends to wield his influence internationally will become clearer in the lead up to a major economies climate summit he plans to host on Earth Day, 22 April”, Morton explains. “He has set the summit as a deadline to announce a new emissions reduction target for 2030 to put the US on the path to net zero by 2050.”

In reality, the “Biden Plan for a Clean Energy Revolution and Environmental Justice” does not hold up to serious scrutiny. No firm targets have been set to reduce emissions over the next four years—that is, while Biden is in power.

Much has been made of Biden’s order to “pause” new permits and leases for oil and gas drilling. But a pause is not a ban. In fact, within a week of coming to office, the new administration quietly issued 31 new permits for drilling projects.

He has been celebrated for shutting down the Keystone XL oil pipeline, which, his executive order proclaims, “disserves the US national interest” by threatening “a dangerous, potentially catastrophic, climate trajectory”. If Biden were genuinely concerned about this “dangerous trajectory”, he would shut down other oil and gas pipelines. But he knows that the real “national interest” is to keep exploiting the natural resources at the country’s disposal to enrich its energy companies and maintain its dominance over global rivals.

Governments are not the only ones clambering aboard the “net zero by 2050” train. Many companies have declared their commitment to carbon neutrality. Last September, the UN celebrated a doubling, in less than a year, of “the number of commitments to reach net-zero emissions from local governments and businesses”. The press release congratulated everybody from Ford to Facebook.

But when you read the fine print of the corporate pledges, their plan for “net zero” quickly collapses into the absurd. They all intend to keep emitting greenhouse gases but to balance their “footprint” by building immense carbon-sinking tree plantations. Shell, for example, plans to offset its emissions via “major reforestation—some 700 million hectares of land would be acquired over the century, an area approaching that of Brazil”.

If a single company needs to take over a Brazil-sized area to offset its carbon emissions, there is no hope of offsetting global output. Consider the similar “net-zero” announcements from BP, General Motors, Volkswagen and Qantas. When you do the maths, as ActionAid points out, “there is simply not enough available land on the planet to accommodate all of the combined corporate and government ‘net-zero’ plans”.

The unfortunate truth is that 2050 goals are an easy way for companies to appear eco-friendly while doing absolutely nothing to change their business models and reduce emissions in the short term.

2050 is not good enough. It has become the preferred talking point of the capitalist establishment because its distance in time allows them to burn through as much coal, oil and gas as they fancy in the here and now. They much prefer commitments measured in time to those measured in gigatonnes of carbon dioxide.

Climate summits won’t save us: We need to protest COP26

Why Greta Thunberg is cooler than you 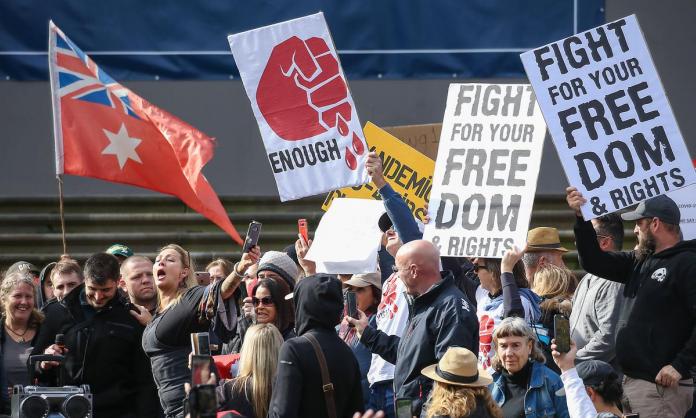 ‘Flames cast against the darkness’: The radical poetry of Thomas McGrath