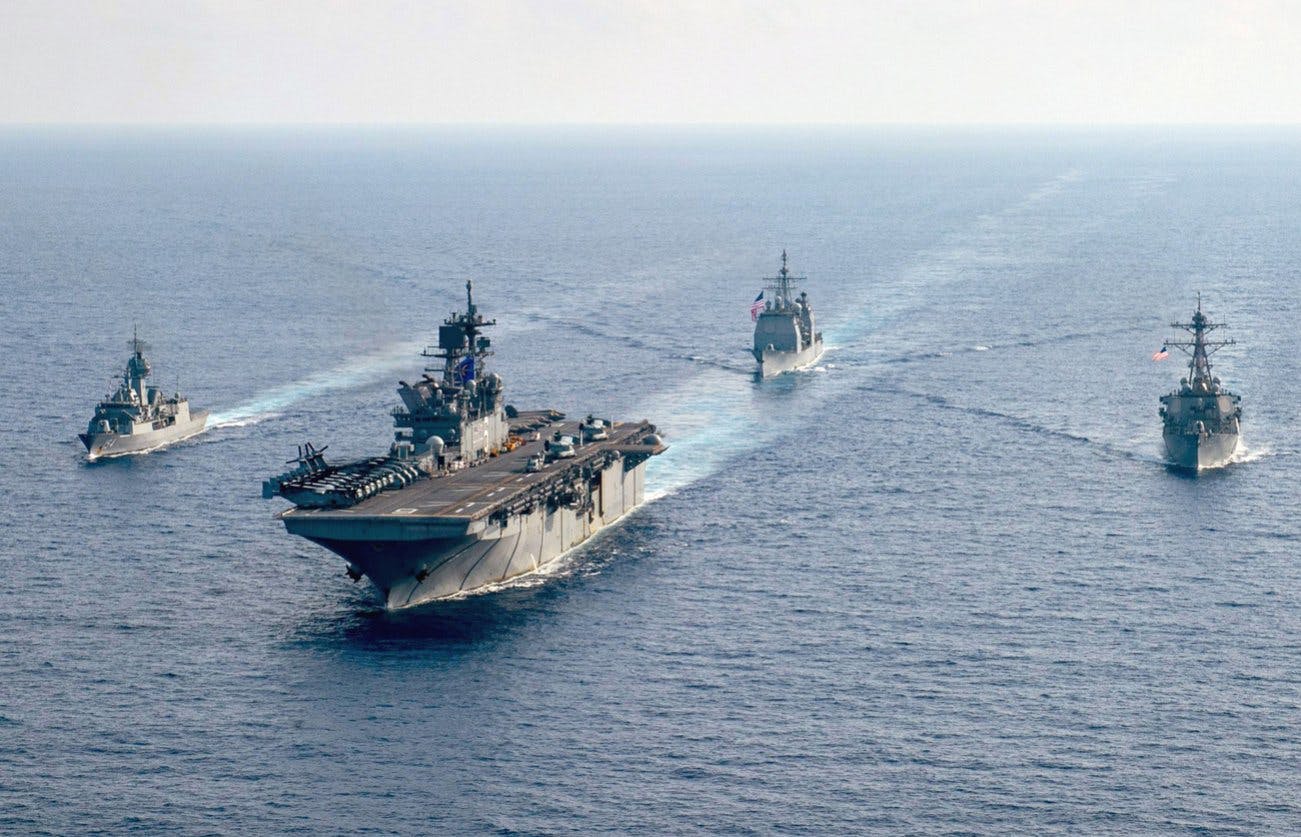 Former Prime Minister Paul Keating’s recent National Press Club address on Australia’s relationship with China has led to a storm of criticism from the right-wing militarist brigade who seem to be salivating at the prospect of front row seats for WWIII.

Minister for Defence Peter Dutton hit the airwaves to inform us that Keating is “out of control and damaging our country”, accusing him of being a “grand appeaser” for making the entirely reasonable point that “Australia should not be drawn ... into a military engagement over Taiwan—US-sponsored or otherwise”.

To make the stakes of this debate crystal clear, Dutton told the Australian on 13 November that, in regard to Taiwan, it “would be inconceivable that we wouldn’t support the US in an action if the US chose to take that action”. Scott Morrison also rejected Keating’s views on the Today show and explained, “As people know, we’ve taken a very strong position here in the Indo-Pacific and we’ve taken a very strong stance standing up for Australia’s interests”.

It’s not just the warmongers in the Liberal Party expressing outrage over Keating’s comments. Peter Hatcher, who has spent years beating the war drums against China, in an opinion piece for the Sydney Morning Herald on 16 November, admits, “[I]t would be a grave decision to join the US and Japan and go to war against China”, but goes on to argue that “the alternative would be grave, too” and that history “has shown the futility of appeasing aggressive dictators”.

The ALP has also distanced itself from the views of its former leader. Richard Marles, deputy federal leader of the party, said that while Keating is “entitled to his view ... Labor have made it completely clear the challenges that China represents”. And Marles is right—the ALP has worked in lockstep with the Liberals over the question of China.

Keating is not some principled anti-imperialist. His argument largely hinges on the idea that supporting Taiwan isn’t in Australia’s “national interest”, and his views are rooted in an older geopolitical tradition that has emphasised the opportunities for Australian capitalism in further engagement rather than confrontation with China—a view that until recently was dominant in Canberra.

That a more aggressive stance on China has emerged as the new consensus among much of the Australian establishment is a dangerous development. In particular, gaining wider traction is the idea that Australia is a weak nation being undermined by a soft business class of China appeasers, which leaves us wide open to invasion. This argument is being used to break down the healthy suspicion of militarism and war that has embedded itself in the population after years of unpopular military interventions in the Middle East.

The most shocking thing about the state of debate in Australia over China is how blasé it is to the prospect of initiating military action that could end in tens or perhaps hundreds of thousands of deaths.

And for what purpose? Much is made of the need to defend Taiwan’s “little democracy” from Chinese aggression. But while Taiwan’s right to self-determination should be respected, military intervention by the US, Australia and others into a conflict over the region would most likely end in a bloodbath in which Taiwanese rights would be totally subordinated in a militarist free-for-all between the major players in world geopolitics.

After all, Australia and the US are hardly principled defenders of the self-determination of nations, as a cursory look at the history of Western intervention into the Middle East shows. What they care about is the challenge that China poses for the continued dominance of Western powers over the international political system, not the rights of the Taiwanese or anybody else.

But this idea is anathema to the Australian establishment. James Paterson, chair of the parliamentary joint committee on intelligence and security and a Liberal senator for Victoria, took to the pages of the Sydney Morning Herald to argue that Keating’s “false moral equivalence between the United States (an imperfect liberal democracy but one that is open about its faults and seeks to address them) and China (an authoritarian regime widely accused by human rights groups of systemic abuses and even genocide) is simply foul”.

What is foul is Paterson’s, and the Australian establishment’s, hypocrisy over this issue. As Keating pointed out, while the Sydney Morning Herald, the Age and the ABC have been happy to write about China’s human rights abuses, they have had almost nothing to say about India’s attacks on Muslims in Kashmir, about the history of American military interventions against democratically elected governments in the Middle East and Latin America, or about the role that Australia’s allies like India, US and Japan have played in stoking military tensions in Asia.

While China’s increasingly authoritarianism is heinous, these champions of Australian militarism have nothing to say about how all the big powers regularly violate international laws in pursuit of their own interests, or about how the military-industrial complex and intelligence agencies have massively increased their power in Western, so-called democratic countries.

In a situation where key sections of the ruling class in Australia and elsewhere are preparing the ideological ground to justify war, we need to reject the logic of increased militarism in an increasingly unstable world.

When a new government is being formed, the appointment of senior bureaucrats to the public service often tells you as much about how the country will be run, and in whose interests, as does the allocation of ministries to politicians.

Universities around the country are entering enterprise bargaining negotiations and there’s a debate about what the National Tertiary Education Union’s wage claim should be.

UK Home Secretary Priti Patel has approved the extradition of Julian Assange to the US, where he will face 18 espionage charges brought against him by the Department of Justice. The charges carry a combined penalty of up to 175 years in prison. It is another cut in the long, torturous crucifixion of the Wikileaks founder, who dared to embarrass and expose the war crimes of the US empire and its allies.

It has been generations in the making but, on 19 June, the first ever leftist president of Colombia was elected. Gustavo Petro defeated his right-wing opponent, Rodolfo Hernández, in a second-round run-off with 50.4 percent of the vote against 47.3 percent. The traditional conservative and centre-left coalitions were both defeated in the first round, winning 24 percent and 4 percent of the vote respectively.

There’s plenty to be said about the outcome of the Fair Work Commission’s annual wage review—but the widespread claims of a “union win” fall flat. After all, for most workers affected by this week’s FWC decision, the result will be a cut to real wages.