Chicago teachers show us how 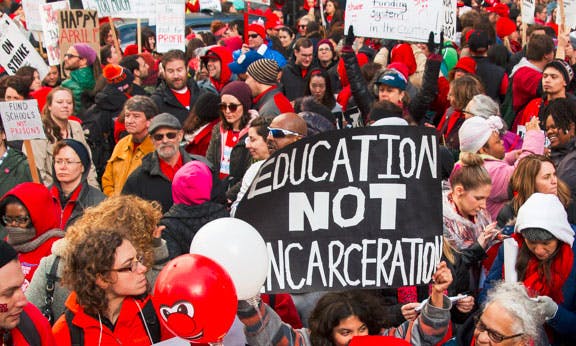 Downtown Chicago was a sea of red on the evening of Friday, 1 April, as members of the Chicago Teachers Union (CTU) and their supporters struck and rallied against contract violations and lack of funding for public schools.

The teachers’ strike largely set the political agenda in Chicago for the two weeks I was there, and beyond. Every media outlet carried discussion of the strike and the political issues involved.

In casual conversation, I could explain that I was visiting for the Labor Notes conference, which has the slogan “putting the movement back in the labor movement”. People would nod politely. As soon as I mentioned that the CTU was part of the conference, everyone knew exactly what I was talking about: in Chicago, and to some extent beyond, the CTU has become a byword for mass resistance to austerity.

Not only that: the CTU has become a focal point for groups fighting poverty wages and racism. Dozens of solidarity actions occurred across the city, involving activists from the Fight for 15 movement (Which demands a $15 an hour minimum wage) and #BlackLivesMatter, as well as other state and city workers whose wages, conditions and vital services are under attack.

One of the most important stories from the strike is the way in which the CTU has rebuilt itself. A decade ago, the union was something of an empty shell. The leadership did very little to mobilise members against attacks on working conditions and public education, while the membership was cynical and disengaged.

What started to break this dreary cycle was a left wing caucus within the union, the Coalition of Rank and File Educators, formed in 2008 by long-time militants and anti-racist activists, including some socialists. CORE held reading groups and started systematic organising, battling alongside parents against school closures, which mainly target majority Black and Hispanic neighbourhoods around Chicago.

CORE and their allies didn’t win every battle. But they built a network and started to set a new, more combative tone within the union.

This work laid the basis for the CORE ticket to win the CTU elections in 2010, which in turn allowed even more intensive, school-by-school organising. Delegate structures were revived, and delegate and activist training increased. In close consultation with delegates and members, the union developed detailed demands for decent public education, and insisted this could be paid for by Chicago’s mayor Rahm Emanuel taxing some of the incredible wealth that flows through the city.

Emanuel, a prominent Democrat and a former chief of staff for president Obama, is popularly known as “Mayor 1%” due to his commitment to Chicago’s billionaire class. He has stacked the Chicago Public Schools management board with bankers and property tycoons.

Their agenda involves breaking up school systems to allow private corporations to get their snouts in the trough of the nation’s $600 billion annual spending on public schools (about the size of the openly declared US military budget).

Union busting is also a big part of the neoliberal agenda: of all US unionists, one in four are teachers. And property interests see breaking up public schools in poor areas as one way of smashing communities to allow gentrification.

Most US teacher unions say that it’s impossible to defeat these powerful political and economic interests, and attempt to salvage a sorry compromise without mobilising their members. In contrast, the entire organisation of the CTU was dedicated to intensive preparation for an all-out strike to defend public education and teachers’ working conditions.

The result was the spectacular nine-day Chicago teachers’ strike in 2012, featuring mass picketing every morning and regular mass protests downtown. This display of strength forced mayor Emanuel and the CPS to back down from the most severe attacks on teachers and the school system.

As well as the CTU’s class struggle approach and its focus on detailed organising, the union stands out for treating racism as core union business. This is crucial for any union to be effective, but especially so in Chicago – one of the most segregated cities on Earth. The CTU took the authorities to task over the racist consequences of CPS hiring and firing practices and the racist pattern of school closures.

The CTU has also taken a stand against the racist terror dished out by Chicago police. Late in 2015, when video emerged of Black teenager Laquan MacDonald being shot 16 times while walking away from a Chicago police officer, the CTU’s House of Delegates voted to endorse and build a snap protest that shut down one of Chicago’s swankest shopping strips on “Black Friday”, the busiest retail day of the year.

This support from the most prominent union in Chicago was one factor in turning the shooting of Laquan McDonald, and mayor Emanuel’s cover-up of it, into a major political scandal for the city authorities.

These years of hard work and intensive organisation were very much in evidence during the 1 April strike. Every teacher I talked to could explain, in detail, why the claims of the city authorities to be too poor to pay for decent schools were nonsense – with the CTU’s catchphrase “broke on purpose” on everyone’s lips.

Every teacher I talked with was proud at some level that they were spearheading, not just a campaign for a decent contract, but a movement against austerity and injustice right across Chicago and beyond.

In the predominantly Hispanic Back of the Yards area of Chicago, striking teachers were joined by parents and students for a “walking school bus” protest, marching from school to school and ending in a short “teach-in” in a local school.

Chants of “We pay taxes – why don’t they?” alternated with “Si se puede!” (Yes we can!), while a deafening chorus of trucks, buses and cars sounded their horns in support. People came out of shops and cafes to join the march or to applaud: a great example of how organised workers can use industrial action to spearhead a movement that inspires wider layers.

The feeling was the same at Chicago State University, a majority Black university in South Chicago. Illinois Republican governor Bruce Rauner, a billionaire hedge fund manager, has refused to approve a budget for the state because he hasn’t been able to force harsh anti-union measures through the legislature.

The resulting deadlock means that CSU, which usually gets 30 percent of its budget from the state government, has received not one cent of this money for the past nine months. All 900 staff have been given layoff notices.

I’ve heard sentiments like this expressed often enough. But I’ve rarely seen it reflected in a single day of protest such as 1 April, all over the city of Chicago. Hundreds of striking teachers joined a protest of low paid workers at Chicago’s O’Hare airport. A smaller group rallied outside the Illinois Youth Centre detention facility, demanding “fund schools, not jails”, and marched to neighbouring schools, where they received a warm response on the pickets. A protest rally at Roosevelt Elementary School marched in solidarity to the nearby Chicago Transit Authority bus station, hearing from a sacked union delegate.

The day of strike and protest culminated with a 4pm rally of up to 20,000. As well as teachers, parents and students, and city and state workers facing cutbacks and attacks, activists from #BlackLivesMatter, an anti-deportation collective and Fight for 15 all gave stirring speeches.

Irene Robertson was part of a 34-day hunger strike to save Dyett High School, a majority Black school in the rapidly gentrifying Bronzeville neighbourhood, from closure last year. She addressed the massive rally to an electrifying response:

“Every last one of us, all the proud parents of Bronzeville and myself, stand for CTU! … And Rahm Emanuel, and Bruce Rauner: Get your greedy hands off our children!”

And in a chant popularised by the #BlackLivesMatter movement, and heard throughout the city on 1 April, Robertson led us in a chorus and response to finish off:

The fight for a decent contract and proper school funding has a long way to run. More action is expected after June, in the new school year.

Victory is far from certain. The CTU faces powerful enemies, and although workers throughout Chicago are inspired by the union, few have the history of organising and fighting that Chicago teachers have created over the past decade.

But as a living, breathing, fighting example of how a moribund union can be turned around, transformed into a fighting force, and then can spearhead a mass movement, the CTU is already giving us both inspiration and an education.

This article is part of a series on social classes in Australia, which also includes pieces on the working class and the ruling class.