Parameswary was displaced in Sri Lanka and spent 23 years in refugee camps in India. She then fled Chennai with two of her sons in search of something that many of us take for granted: security. But in Australia, her life has taken a nasty turn. “Living here is a lot worse than living in the refugee camps”, she says through a translator. “We came here to rebuild our lives. We were doing okay, then all of a sudden the government has taken away the visa and the support.”

The Broadmeadows property the family shares with three men is squalid. Parameswary’s room is an extension built onto a caravan out the back. The kitchenette doesn’t work, and the van is full of jumble. The men live in the house, which is tiny. Perhaps they’ve lost respect for themselves. Perhaps they’ve never learned to clean up after themselves. Whatever it is, the place screams neglect. Black boilover cakes the stove top, and there’s rubbish everywhere. It’s dirty, dusty and dank. Parameswary closes the door to the bathroom, not wanting whatever state it’s in to be on display.

She and her sons, now aged 17 and 19, landed on the Cocos Islands, an Australian territory in the Indian Ocean, in April 2013. They spent time on Christmas Island, then in Darwin. Eventually, Parameswary says, they got a bridging visa and were left in a hotel in Thomastown, Melbourne. She later applied for a Safe Haven Enterprise Visa (SHEV), a five-year temporary protection visa. In January, she was rejected. Soon after, her appeal was denied by the Immigration Assessment Authority – which rejects more than 90 percent of Sri Lankan asylum seekers’ appeals. Her case is now before the courts.

“We are genuine refugees. I don’t know why the government is treating us like this”, she says. “The reasons cited for rejecting our claim are laughable. They say that because we go to Christian churches we should be safe in Sri Lanka. [But] we suffered a lot there. When I was in high school, all the school children were put in a line and our hands were burned by the Sri Lankan Army to identify all those with family connections with LTTE [Liberation Tigers of Tamil Eelam, the largest of the militant groups waging a war of national liberation against the Sri Lankan state].”

The scars of war inflicted on a 12-year-old girl remain. The large mark on her left hand from a hot iron rod. Her shins cut up from barbed wire. And there are the memories. In 1987 her pregnant sister was sexually assaulted and murdered. The family suspects the military. Three years later, her father, older brother and younger sister were killed. “Our family was targeted because we gave food to the LTTE”, Parameswary says. Their village in the north was an LTTE stronghold. The day her family members were killed, there was a battle between the army and the Tigers. “The LTTE evacuated the village and helped survivors get to India. It was the LTTE who supported us”, she says.

Parameswary fled the country 30 years ago and, as with so many others, looming deportation weighs. But there are more pressing concerns right now. She received a small payment from the government until January. Now it’s been cut because her application for protection was rejected. She trained as a cook, but it’s almost impossible to get a job in this crisis. And while the rent of $1,000 per month for three isn’t exorbitant, it’s a lot for a family with no income. “For the last three months I have been borrowing money from my friends. They have been asking me to pay them back. I don’t know how I’m going to do it. I feel I can’t face them”, she says.

According to Umesh Perinpanayagam from the Tamil Refugee Council, Parameswary is not alone. The council has received around 50 distress calls over the last month, mostly in Melbourne. “Most of these people have been able to support themselves until the COVID-19 crisis hit”, he says. “But their visa status excludes them from any social security by design, despite the roles they’ve had working in the Australian economy.”

Across town, in Dandenong, Sutharsan is living in a garage. Bare concrete floor, corrugated iron roof, no insulation. Brick wall one side. On the other, cement sheeting, possibly asbestos, which is cracked and with two holes. Broken slat windows are covered with cardboard and plywood. His single bed has a blanket, but no doona, and the small electric fan heater has no hope of staving off the cold. 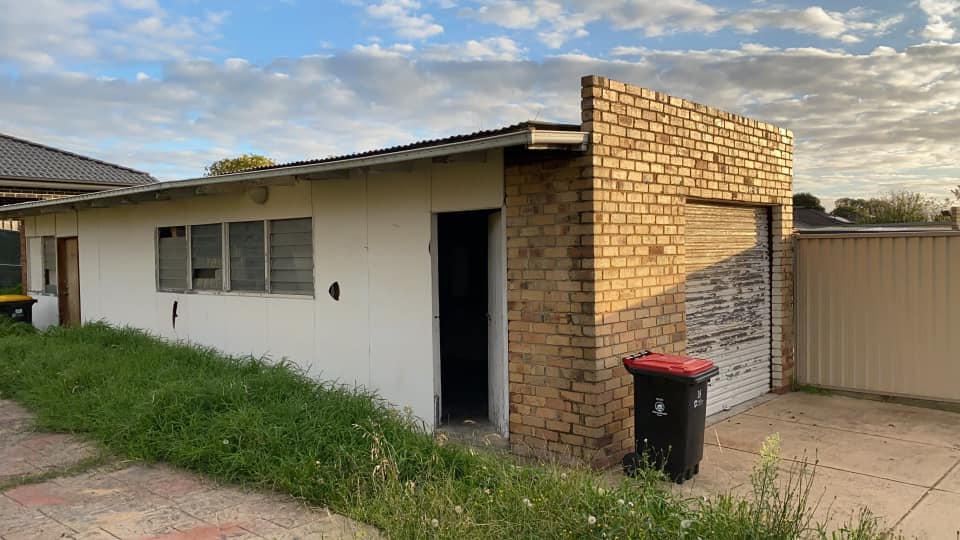 Earlier this year I visited refugee camps in India. This is worse than anything I saw there – and the rent is $110 a week. A small butane burner sits on shelving under the broken window, but Sutharsan isn’t eating much, or well. To top it off, after two months living in this dump, he’s being evicted. When contacted, the owner says that someone in the house brought him in without her knowledge and that he’s got to go now that she’s found out. Maybe. But others lived here before Sutharsan. And there’s another man currently living in the room behind the garage. It’s possible that she’s moving him on because Sutharsan no longer has a job and can’t pay the rent.

Like Parameswary, he’s a Tamil who fled the conflict. His sister, a member of the Tigers, was killed in 1999. Like most of the population, he was drawn into the war, escaping to India in March 2009, as the Sri Lankan military’s final, genocidal offensive was under way. “After three months I came back because my wife and young daughter were there and I had to go back to them”, he says through a translator. But Jaffna was under heavy occupation.

“The military harassment was really bad. I couldn’t stay in my house. Not just the military, they had a Tamil political party, the EPDP [Eelam People’s Democratic Party, a paramilitary group supported and protected by the Sri Lankan state], which was working with them”, he says. “At that time it was very chaotic. They would randomly come on bikes and attack people. They were hunting people down.” The war formally ended in May 2009. But the harassment, killing and disappearance of Tamils continued, the Sri Lankan forces acting with impunity for years. Now, the government has a stranglehold over all Tamil areas and is attempting to destroy the foundations of Tamil national life. Sutharsan fled to India and then paid an agent to get to Australia, arriving in 2010. While his SHEV application has been rejected, he has a bridging visa with work rights while waiting for the Administrative Appeals Tribunal to hear his appeal. But there’s been no work for the last month. “The last four days I haven’t properly slept”, he says. “I stand to become mentally unwell. I can’t look after my family in Jaffna [in the north of Sri Lanka]. I haven’t seen my daughter since she was seven months old. Now she is 11 years old. First, I need a job or a place to stay. I can’t even think clearly. I just don’t know what to do.”

As we’re speaking, TRC member Aran Mylvaganam’s phone rings. It’s another refugee facing eviction. There are too many people in trouble for the group to assist properly. “COVID-19 has pushed many of those in precarious visa situations into poverty, but all people in Australia should have the same rights. They should not need to reach out for charity in times like these. The federal and state governments should announce relief packages to assist them”, he says.

Back in Broadmeadows, Suvi the rainbow lorikeet is waddling around the floor in Parameswary’s room and nibbling at our pants legs. Next to the bed is a photo of her mum wearing a white and green saree in the Indian refugee camp. She died last year. “I miss her so much. I haven’t seen her for many years”, Parameswary says. “Everywhere has treated us badly – Sri Lanka, India and now we come down here, we face the prospect of death as refugees [being refugees for life]. If the government gives us a visa, we’ll be able to survive. We can’t go back to Sri Lanka. We went through so much struggle in Indian refugee camps. If me and my kids have a visa, we will be able to find a way to survive.”

The Tamil Refugee Council has launched a fundraiser to support Sutharsan.

There is also the Undocumented Migrants COVID-19 Fund, which has been providing support during the pandemic.

Prime Minister Anthony Albanese has confirmed that the proposed Indigenous Voice to Parliament will be an utterly symbolic affair. Not only will it be a merely advisory body without any real power over government policy, Albanese has also made clear that “the legislation of the structure of the Voice won’t happen before the referendum”.