Lessons from the Your Rights at Work campaign

As unions launch a round of protests under the Change the Rules banner, it’s worth recalling the history of the Your Rights at Work campaign, which concluded in 2007.

Directed against the Howard government’s anti-worker WorkChoices legislation, Your Rights at Work protests were the biggest working class mobilisations in Australian history. The campaign cost John Howard his seat in parliament and tipped his Liberal government from power.

Yet the fruits of the campaign were meagre for the trade union movement. Labor rolled into government at the 2007 election with a blank cheque from unions about what reforms to enact. The result was the Fair Work Act, a suite of minimal improvements alongside the retention of most longstanding anti-union laws.

After unexpectedly winning control of the Senate in the 2004 federal election, John Howard’s Liberal government moved to dramatically rewrite Australia’s industrial laws. Under WorkChoices, legal minimums were stripped and the “no disadvantage” test was scrapped: workers could be pressured to sign an individual contract or collective agreement even if this left them worse off than the industry award.

The result was agreements like the one that the retail chain Spotlight foisted on to its 6,000 workers. This “agreement” (offered as a condition of employment to new workers, and pushed by management bullying on to existing workers) did away with all penalty rates, tea breaks, rostered days off, minimum shift lengths, minimum breaks between shifts and various allowances. In return, workers got a pay rise of two cents per hour.

Right of entry rules for union organisers were tightened. A long list of workplace conditions were deemed “prohibited content” and could no longer be a part of bargaining. Workplace agreements could no longer bind contractors and require subcontractors to abide by union pay and conditions.

The government gave itself new powers to penalise industrial action. Workers in the construction industry were subjected to new and strict industrial laws and a special government task force, the Australian Building and Construction Commission (ABCC), was created to bring legal cases for industrial action – resulting in millions of dollars in fines. Government funding to universities was tied to the requirement that management embark on vicious attacks on collective agreements.

Momentum is a crucial factor in politics. Often, the vast mass of workers can resent what’s being done to us, seeing no viable alternative to challenge it. WorkChoices shattered this workaday reality. Suddenly, with attacks on large sections of the working class, and unions’ right to organise under threat, there was an appetite for resistance across the whole class – reflected in both the protests and the opinion polls.

However, an appetite to fight can’t be sustained unless it’s acted upon. Your Rights at Work did the opposite. Rather than being used to energise and invigorate workplace activism, days of action were spaced many months apart. Momentum waned, and eventually protests were wound down altogether as the campaign was rolled into a marginal seats campaign for Labor.

Addressing a crowd of 250,000 in Melbourne at the November 2005 rally, then ACTU secretary Greg Combet signalled the shift. “A new campaign starts today”, he declared. “Your rights at work are not just worth fighting for – they are worth voting for.”

Despite occasional challenges from the left wing unions in Victoria, the direction of the campaign always remained firmly in the hands of the top ACTU officials.

Labor eventually rode into power on the back of the campaign, but little pressure was applied on it to deliver. When Kevin Rudd rejected the idea that the incoming government owed any special obligation to the union movement, the blowback was minimal. When Julia Gillard drafted the Fair Work laws, they rolled back some of the worst features of WorkChoices, while keeping the architecture in place.

Rules around “prohibited content” were eased, for instance, but it’s still unlawful to bargain to keep labour hire out of a workplace. Pattern bargaining is lawful, but industrial action in pursuit of a pattern agreement is not. Julia Gillard admitted that her proposed laws were so restrictive that, under them, workers who stopped work to attend a Your Rights at Work rally could face disciplinary action and fines.

The ABCC was retained but rebadged Fair Work Building and Construction. Though prosecutions slowed under Labor, the incoming Liberal government in 2013 easily reversed this by increasing funding and appointing zealous union-busters to senior positions.

Labor also created the Fair Work Ombudsman – a body spectacularly unsuccessful at cleaning up chronic underpayment in a string of industries, but successful (and increasingly so) in prosecuting unions for taking unprotected industrial action.

And the restrictions on our right to strike introduced by Labor in the early 1990s remain: the obligation to give three days’ notice before taking industrial action, giving industrial tribunals the power to outlaw strikes on the basis of “economic harm” and the fragmentation of working class struggle into countless individual enterprise agreements, making industry-wide industrial campaigns largely a distant memory.

Given the depth of feeling around WorkChoices and the sweeping nature of Labor’s 2007 election win, the fruits of the Your Rights at Work campaign were meagre.

There are clear lessons to draw from the Your Rights at Work campaign.

The ALP in office has failed to deliver for workers, because its loyalty is not to the working class voters who put it there. Labor’s first priority is to administer Australian capitalism. This means protecting corporate profits, minimising industrial conflict and keeping union power in check.

So a campaign that gives Labor a blank cheque won’t win meaningful changes to our industrial laws.

For the Change the Rules campaign to be effective, we need a specific and widely known log of claims. We need to create a sense of expectation and entitlement among broad layers of workers.

Our side is at its strongest when our struggles are powered by mass rallies and strikes. And whichever party wins the next election, our fight continues until we win significant reform of the country’s industrial laws – especially regarding our right to strike. 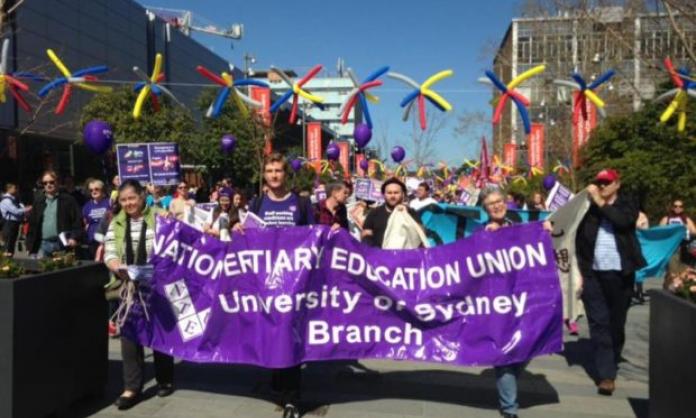