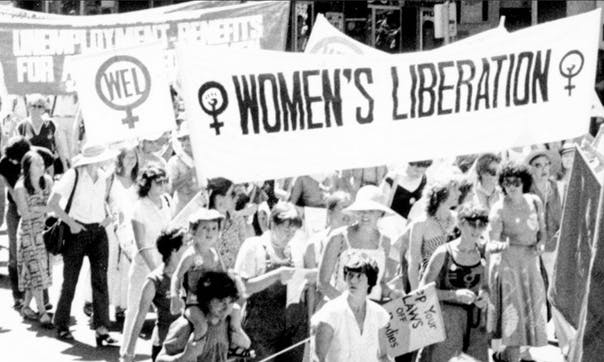 Women are treated like objects, our labour is underpaid, and the burden of child care and other unpaid work in the home disproportionately falls on us. A culture of sexism and sexual violence pervades every institution and industry in capitalist society. So it’s no wonder that extreme misogyny is making a comeback on the political right. “Sex differences are a wonderful, beautiful thing”, argues child star and alt-right luminary Ben Shapiro. “If you’re not reinculcating them in your child”, he says, “you are making a very large mistake.”

Sexism is a central pillar of a society that needs to oppress the majority of people in order to assert and maintain control by the 1 percent. Sexism also makes money: the objectification of women’s bodies is used to sell products, the unpaid work primarily women do in the home saves governments and corporations billions, and women’s lower wages boost profit rates.

Sexist ideology is needed to justify and normalise the inequality of women. Gender stereotypes form an important part of this by pressuring women to conform to various sexist roles, including that of available and attractive sexual partner, or nurturing and self-sacrificing mother and carer. These may have changed and adapted over time, but so long as society demands that women fulfil gendered economic and social roles, they will persist.

Sexist attitudes and ideas seem inescapable not because they are natural but because they’re perpetuated by every institution in society, from the media to the education and legal systems. Then they are continually reinforced by our real experience of inequality. Behind this day to day experience of sexism – sexist attitudes, abuse, catcalls, misogynistic behaviour and stereotypes – is the system of capitalism.

Under capitalism the oppression of women is reinforced by both the experience of exploitation in the workplace and the unpaid labour that women particularly are expected to carry out in the home.

The capitalist class needs to guarantee a cheap, steady supply of labour power, and this means taking an active interest in the reproduction of the working class. Household and family life has thus been constructed, reinforced and transformed according to the changing needs of capitalism.

While the women’s liberation movement and campaigns around LGBTI rights have forced some legal victories, the family unit remains a site of oppression. Women account for 70 percent of primary carers in Australia and spend on average three times longer caring for children every day than do men. One in five mothers say they were fired, dismissed or their contract was not renewed because of their childcare responsibilities.

From the cradle to the grave, unpaid labour by women provides a social service essential to the maintenance of the workforce, and therefore to the profits of capitalism. Sexist ideology is there to convince women – and men – it’s not only women’s responsibility, but also our biological destiny, to find personal fulfilment in carrying out this work.

In the era of neoliberalism, sexist expectations in the home have been leaned upon to shift more of the responsibility for child care, aged care and even aspects of health care onto families. As funding is cut and increasingly replaced with neoliberal programs like the NDIS, aspects of care are being shifted away from the state and further onto family units, and primarily women.

In the workplace sexism is also rife. The gender pay gap exists in every industry, and industries with a predominantly female workforce are particularly underpaid. This happens regardless of what type of labour is carried out, or how skilled it is.

Greater representation for women in the media, boardrooms and parliament is commonly assumed to be the most effective way to challenge sexism. From Margaret Thatcher to Hillary Clinton and Gladys Berejiklian, we’re meant to be grateful and empowered when our “sisters” make it to the top.

But more often than not, greater numbers of women in the halls of power just provides cover for the system, giving the illusion of progress and equality but doing nothing to elevate the position of the majority of women. Quite the opposite: in order to maintain their elevated social position, the women who make it must play their part in actively maintaining the oppression of other women, as the system inevitably demands.

The richest person in Australia is a woman, but the average woman worker get paid 14.1 percent less than men. We’ve had a woman, Julia Gillard, in the highest political position in the country, and yet she spent much of her time vacillating over equal pay, cutting single parent welfare payments and locking up refugee women in Nauru. The CEO of the Australian Banking Association is a woman, who presides over an industry with the largest gender pay gap.

More power and better pay for working class women threaten their wealthy “sisters”. A strategy to eliminate sexism must therefore involve confrontation with the system that causes it, not the slow accumulation of privilege within it.

We have to understand the capitalist system in its totality to understand different forms of oppression. Sexism cannot be understood in isolation from other forms of oppression, nor, importantly, the exploitation of the working class. Personal experience of oppression might be an important factor in politicising individuals who want to fight back, but it can’t be the starting point for uncovering the thread of profit and control that weaves exploitation, racism, sexism and other oppressions together.

How can an attack on a woman wearing a hijab be explained as sexist in isolation from Islamophobia? How can the rampant abuse of refugee women on Nauru be challenged without an understanding of borders? How can the persistence of the gender pay gap be understood without a picture of the exploitation of the working class as a whole?

Various forms of oppression meld together, reinforce each other and sometimes conflict in modern capitalism. They are most effectively challenged not by movements that view them as discrete, but by those that can integrate an understanding of the complexities of the capitalist system and that understand the common material base of all of them. Bringing together as it does all varieties of oppressed people in a relationship characterised by cooperation, equality and shared power, the workers movement has been central to challenging different forms of oppression, including sexism, but is also the only social force capable of bringing down the system that creates it.

Periods of rising class struggle demonstrate this the best. When workers gain the confidence to fight for their basic conditions like pay and safety on the job, this can lead to other social demands and can also inspire the oppressed to raise their grievances.

The women’s liberation movement of the 1960s and 1970s made gains in Australia precisely because it coincided with a period of heightened working class militancy. Strike rates were rising, peaking in 1974 when Australian workers had the highest strike rates in the developed world. This was the period when abortion was made accessible, no-fault divorce and equal pay were formally won, and sexist stereotypes were seriously challenged.

At the same time, the gay liberation movement started raising its own demands. Socialists and the most radical elements of the trade union movement played an important part in this. Indigenous struggles also tended to orient to class power at this time.

Working class struggle brings workers together in solidarity, and frequently leads to workers challenging the bigoted ideas that capitalism relies on to divide us.

Workers have a collective social power that can bring profits to a grinding halt. It’s our labour that makes the economy function, and it’s our ability to come together and strike that gives us the power to demand reforms and ultimately bring capitalism to its knees.

“Only struggle educates the exploited class”, as the Russian revolutionary Lenin put it. Struggle can call into question many of the ideas that capitalists rely on to maintain their dominance. The idea that women workers were a competitor to men needed to be overcome for unions to launch the strikes that won formal equal pay. Solidarity between Indigenous and non-Indigenous workers was forged in the campaigns to desegregate shops and force them to serve Indigenous customers by threatening union boycotts.

Ideas like sexism, nationalism, racism and homophobia might be accepted by many workers, but they are not in their material interests. Such ideas divide ordinary people and pit us against each other, misdirecting anger away from the ruling class.

The shared experience of exploitation means that the working class can unite – a class that contains the majority of all oppressed groups, every race, religion, sexuality and gender. Class struggle breaks down divisions of discrimination, pushes oppressed people into leading political roles and helps to push forward the demands of the oppressed.

But there’s nothing inevitable about this – the conscious intervention of activists can help to raise class consciousness and broaden the horizons of struggle. So it’s no surprise that it was socialist activists in the gay liberation movement who first approached the Builders Labourers Federation about solidarity between construction workers and a gay student. It was Marxist activists Clara Zetkin and Alexandra Kollontai who launched International Working Women’s Day in 1910, and it was communists who first raised the demand for equal pay in the union movement. It might at times be necessary to argue with workers to use their collective power to fight against sexism on the job and in society at large. But it’s an argument we can be confident of winning, because sexism weakens our side and unity is the best way to build a movement that can win real gains.

Women’s liberation must therefore be central to the fight for socialism. This is why Marxists have been pioneer fighters for women’s rights around the world, to the horror of rich misogynists. The oppression of half the world’s population is a powerful tool for our rulers, but it can also be the catalyst for the kind of explosive struggle that can tear their system down.

Wherever there is oppression, there will be resistance. Socialists want to throw ourselves into every fight against injustice, from the movement to free the refugees, to the struggle against sexism, against the far right and for climate justice. Challenging sexism today can mean fighting for free and unrestricted access to reproductive services, confronting misogynistic propaganda in the media or taking on the systematic sexist abuse that permeates all capitalist institutions.

Understanding how these injustices are tied into the wider social and economic system helps us orient to potential allies or enemies and develop strategies that can not only win in the here and now, but take a step towards building a stronger socialist current committed to the liberation of all.

This article is part of a series on social classes in Australia, which also includes pieces on the working class and the ruling class.