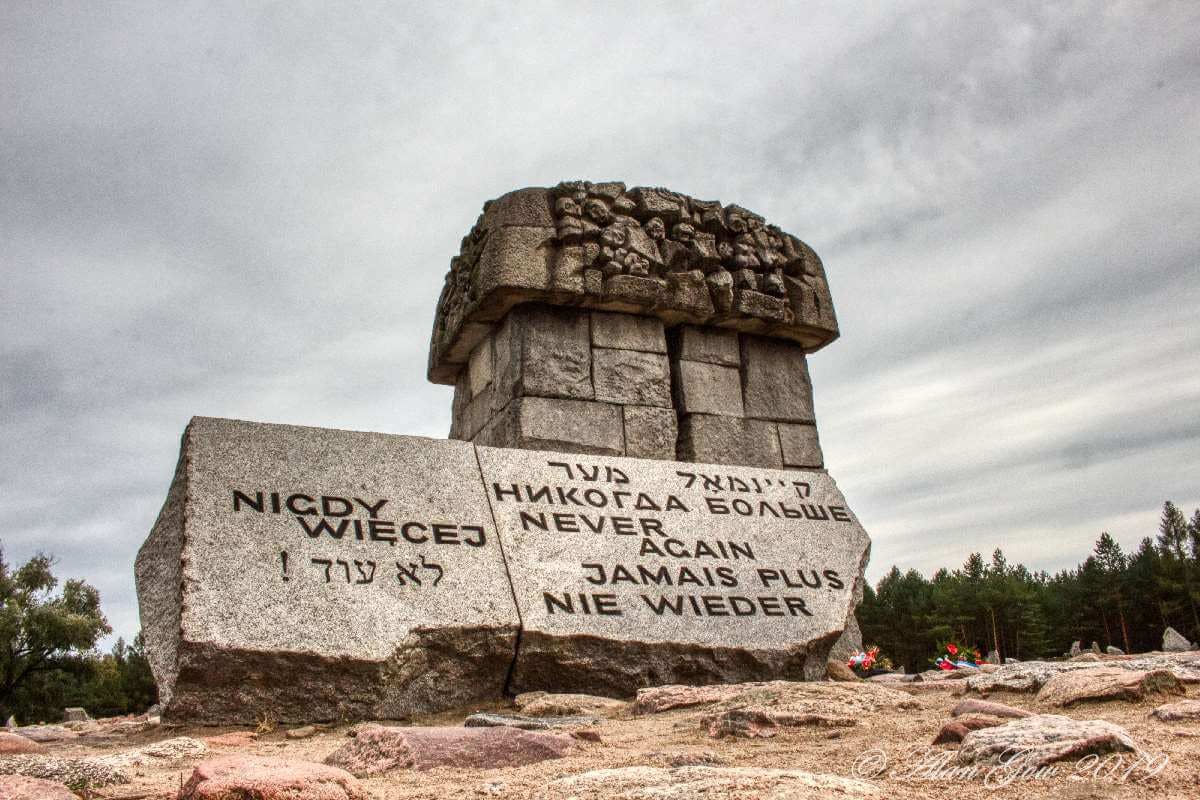 Rabbi Meir Kahane taught the world the phrase “never again” when he published his book, Never Again: A Program for Survival, in the early 1970s. For Kahane and his followers, the phrase wasn’t the liberal cliche it is today. Kahane’s “never again” was an injunction to Jews around the world to support atrocities against the Palestinians—from the denial of basic democratic rights to mass expulsions—and the entrenchment of Israel’s existence as a quasi-fascist, anti-democratic ethno-religious state. “If the Arabs settle among us and make enough children to become a majority, will Israel continue to be a Jewish state? Do we have to accept that the Arab majority will decide?” he asked. “You can’t have Zionism and democracy at the same time.”

Kahane said his plan for Jewish politics was based on the religious principles of the Torah, but really it was based on a mimicry of the military nationalism that had led to the Holocaust itself. As hot water boils and cold water turns to ice, European imperialist nationalism had, under the pressure of war and the threat of revolution, turned into Nazism and the death camps.  In the decades following, Kahane and the extreme right wing of the Zionist movement openly called for Jews to adopt chauvinistic nationalism inspired by that same broad tradition.

To them, “never again” only meant that never again would Jews be pushed around by an even more powerful fascist empire. But Kahane’s program wasn’t just for “survival”, it was for the replication of European right-wing politics in the Middle East, with the Palestinians as the victims. When it came to racial subjugation, scapegoating, and murder of oppressed people, “never again” meant “again and again—forever”.

Kahane’s politics were originally an embarrassing scandal on the fringes of Zionism. But, as he himself repeatedly pointed out, the logic of Zionism tended toward his position. Zionism meant occupation, ethnic cleansing, the repression of democratic rights of Palestinians. In the decades since Kahane published his book, the illusions of "liberal Zionism" have rotted away, much like so-called “socialist Zionism” had in the generations previous. Few now bother to pretend that the ethnic cleansing of Palestine, in alliance with Western imperialism, could ever have led to an enlightened, democratic, and egalitarian society. Now, Israeli politics is dominated by racial and religious chauvinists who better express the logic of Israel’s existence; young far-right Jews inspired by Kahane and his co-thinkers chant “death to Arabs” on their marches in Jerusalem. A Kahanist member of the Israeli parliament, Itamar Ben-Gvir, helped bring about the current Israeli bombardment of Palestine (and the attending mass resistance from the Palestinians themselves) when he temporarily moved his office to Jerusalem's Sheikh Jarrah neighbourhood.

Israel itself is now defined by politics that are most clearly linked to the Western far right: racial chauvinism in the service of anti-democratic military conquest, a mix of 20th-century European authoritarianism and the Deep South of the Jim Crow era. And just as they did in previous generations, Western imperialist liberals turn a blind eye to the atrocities of their useful ally.

Irreligious Jews, like me, often grow up reading Holocaust literature. My favourite was Primo Levi, the Italian antifascist partisan who survived Auschwitz, and who wrote the most creative, sensitive, and humanistic accounts of that dehumanised place. Why read about the Holocaust? Why say “never again”? For those who celebrate the bombardment of Gaza and the expansion of Israel, for those who celebrate Israel’s “right to defend itself” against the oppressed Palestinians, we should read about the Holocaust to learn that Jews suffered uniquely, and that, by implication, Israel has a unique position in the world, justifying its atrocities. That’s how the phrase “never again” can be wielded to justify the herding of Palestinians into ghettoes, the pogroms and the bombardments.

But the Holocaust itself, and the road to it, was more than just the unique Nazi innovation of death camps and gas chambers. Those death camps grew out of the sadism of Nazi Germany at war, where resistance fighters and racial “inferiors” were summarily executed in war-zones. The regime itself took inspiration from the counter-revolutionary fascism of Italy. It tested its strength by executing the disabled, imprisoning socialists and subversives, and imposing lynch law and slavery in Poland. Before the death camps, it drove Jews into ghettoes to slowly starve, hidden from anyone who could stand in solidarity with them. There are many echoes throughout history, and in the world today, of the crimes that led to Auschwitz, because Auschwitz itself emerged out of the same social and political system that dominates the world today: capitalism, with its wars, occupations, and military nation-states.

“Don’t relativise the Holocaust” is the slogan of the right-wing Zionists. Of course, they never honour that injunction: every time a Palestinian kid throws a stone over a wall, they’re accused of laying the groundwork for a second Auschwitz. But suppose we really did accept that the persecution of Jews by Nazis was so totally unique that it creates a special moral category for Israel. What’s the result? Not quite another Holocaust at the moment, but certainly more ghettoes, more subjugation, and another hypocritical, barbaric regime that proclaims itself the bearer of enlightened European ethical values—and, most grotesquely, that proclaims itself the government that has best learned the lessons of the Holocaust.

To me, reading Primo Levi, the lesson I learned was: always relativise the Holocaust. Why read about the depths of horror that oppression can lead to, without resolving to fight against it? “Never again” means: always draw comparisons with the Holocaust, because that’s how you’ll see it in what’s happening around you, and what you have to fight against. “Never again” has to mean: never stand by while people are scapegoated and persecuted. Never again believe the lies of so-called civilised governments, or the respectable journalistic outlets that present the oppressor’s justification as if it is part of a reasoned policy debate. Support the courageous resistance of the people in the ghettoes, the second-class citizens and the occupied nations. Support the refugees who our own governments turn away, but don’t accept their expulsion as a tragic reality of a conflict-ridden world: take part in the international movement to overthrow and smash the injustices that caused them to flee their homes.

Today, those who best learned the lessons of the Holocaust are the Palestinians and their supporters in their millions around the world, who reject the lies of Israel, who stand up to its guns, and who face down slander and persecution from the powerful institutions that support and defend Israel’s crimes. Marching in Melbourne with thousands of pro-Palestinian activists, chanting “long live the intifada”, was the best tribute I could pay to the ghetto fighters of past generations.

Zionists chose to join the system of oppression, to be players in the capitalist world system of imperialist nation-states. We’ll be able to say “never again”, and mean it, not only when Israel is gone, but when the system as a whole, with all its centuries-long global legacy of occupation, apartheid, genocide, and war, has been destroyed.

The Israeli High Court has approved the expulsion of between 1,200 and 1,800 Palestinians from eight villages in the Masafer Yatta region of the South Hebron Hills in the occupied West Bank. Should the expulsions go ahead, it will be the one of the largest incidents of ethnic cleansing in the area since 1967.

US horror in Iraq and Afghanistan
Tom Bramble

The US-led invasions and occupations of Afghanistan and Iraq demonstrate that its claims to be a champion of democracy and human rights are a sick joke. Its condemnation of Russia for invading Ukraine is rank hypocrisy. Just like Russia, the US is up to its elbows in the blood of its innocent victims, their lives destroyed by brutal invasions and occupations justified by lies.

When Nelson Mandela was freed from his Robben Island prison on 11 February 1991, my family, friends and neighbours followed the event with keen interest as they gathered in the living room of my old home in the Nuseirat Refugee Camp in the Gaza Strip.

Amnesty International is the latest human rights organisation to declare Israel guilty of the crime of apartheid. The human rights group joins Human Rights Watch, Yesh Din and B’Tselem in reaching the same conclusion over the last two years.