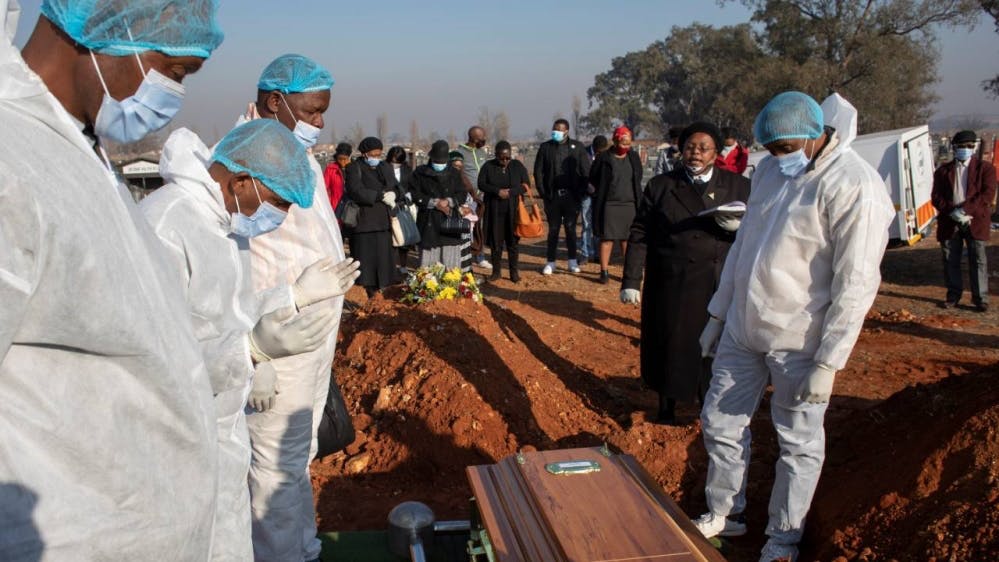 The South African working class is being ravaged. Government figures record thousands of infections and hundreds of deaths per day from COVID-19. In late March, President Cyril Ramaphosa announced a national lockdown to contain the virus. But as restrictions were eased on 1 May and again on 1 June, the case numbers began to soar. At almost 600,000 cases, the country now has the fifth-highest number of recorded infections in the world. On top of this, millions are being thrown into poverty as unemployment rises, the official rate being above 30 percent and gross domestic product predicted to collapse by up to 10 percent this year. Ashley Fataar, a member of the International Socialist Movement, reports from Cape Town on the government’s appalling response to the crisis.

There were 9 million workers in permanent employment before February this year. Up to 3.5 million have now lost their jobs. Women account for two-thirds of those job losses. Forty-two percent of men are working fewer hours. According to some estimates, the economy will not be operating fully for two to three years—but not all companies will remain in operation. Unemployment will remain high for the next three years at least. Of those who lost their jobs between February and April, two-thirds were trying to support a household. They were given a grant of 350 rand per month (about 28 Australian dollars). A living wage in South Africa is widely reported to be at least 500 rand a day (A$40).

Food insecurity was previously at 20 percent. A provincial governor admitted that during the lockdown the figure doubled. Yet the government did not plan for the provision of food to needy families. When it finally did, the distribution was made only through registered non-government organisations (NGOs) and charities. Hundreds of working-class communities suffered starvation because there were no NGOs in their area. When people resorted to street riots and the looting of grocery shops in desperation, police responded with rubber bullets and water cannon.

The lockdown is not the only cause of job losses. Major corporations announced plans to lay off workers as early as last year. But it was set up for failure even before it started. The inadequate income grants and food provision put immense pressure on people to get out and find work to feed their families. It means that bosses can reopen non-essential workplaces without too much opposition from starving workers.

As well as being a factor in spreading the virus, the increasing poverty has worsened the violence directed against women and children. According to United Nations statistics, nearly two-thirds of women have experienced sexual violence in working-class areas. The lockdown pushed those figures to 80 percent. Violence against women has become the country’s second pandemic.

To cut costs, the Western Cape provincial government announced that no coronavirus testing would be carried out on those under 55 years of age. The government also wanted to reduce testing so that the number of discovered cases would not be so high. They want to give the impression that the pandemic has reached its peak. But they can’t hide the reality. According to a Reuters news report, one scientific study “showed some 17,000 deaths above the normal rate, or a 60 percent excess, between early May and mid-July, suggesting more people are dying of COVID-19 than official figures reflect”.

The lockdown has exposed callous levels of bare-faced looting by the ruling class. Services that were supposed to be provided by private companies have been subject to massive over-pricing, or not delivered at all. Contracted companies distributing food parcels charged prices up to three times higher than those charged by supermarkets.

In another instance, a courier company was paid 3 million rand (A$240,000) to take samples from a hospital to a laboratory for testing. They simply dumped the samples on the side of the road. The three largest private groups of hospitals (Life, Mediclinic and Netcare) have, since 2016, paid out an average 400 million rand every month to shareholders. That money was not invested in equipment, more beds or staff. It went into the pockets of the already rich.

The hospital system has been undermined for two decades due to cost cutting. It is now unable to cope with the pandemic. An insufficient number of medical personnel have to work with inadequate personal protective equipment. Hospitals are turning away anyone who does not have a serious enough case of COVID-19—including elderly patients who need regular check-ups. Even then those requiring hospitalisation are turned away.

The private sector has benefited from the pandemic. Companies with family connections to the government have been awarded government contracts. In addition, the government has obtained a loan of US$4.3 billion from the International Monetary Fund. The South African government is serving the needs of capital, not protecting the lives of millions of workers and their families.

Desmond Tutu’s life was one of struggle against injustice. The politicians who line up to laud him today are not fit to wipe his feet.

Forty minutes before midnight on 7 July, Jacob Zuma’s motorcade sped out of his mansion to hand himself into custody. It is the latest step downwards for the former South African president.

The US is divided, but its elites are united against China
Eleanor Morley

Tensions between the United States and China are escalating rapidly. The ongoing rift between the world’s two largest powers has intensified during the COVID-19 crisis, as both countries jostle for position in a rapidly changing political climate. There is a growing consensus among the US ruling elite for a hardline approach to China’s rapid rise. A new White House report outlining a more aggressive stance, which may prove to be the most significant foreign policy document since 9/11, has been co-signed by every relevant federal department.

Sub-Saharan Africa is facing its greatest crisis in generations. The continent thus far has been less affected by the pandemic than other parts of the world. But the impact of the global economic crisis is already enormous.

Towns and cities across Sudan were flooded on 30 June with protesters responding to the call for a “millions march”. It was the largest pro-democracy rally since the 3 June massacre in which the notorious Rapid Support Forces – formerly a militia called the Janjaweed, created to wage a genocidal war in Darfur – crushed a months-long sit-in outside the Sudanese military headquarters in the capital, Khartoum.